Pakistan Telecommunication Authority has reported a slack growth of cellular subscribers being added by mobile companies for the month of August 2008. PTA’s latest statistics show that cellular companies were able to add only 0.2 million connections in last month.

Graph shown below is basically the depiction of telecom industry, which is going through tough time due to number of reasons including hiked inflation, political and economical instability in the country, increased taxes on telecom services and to some extent the policies. 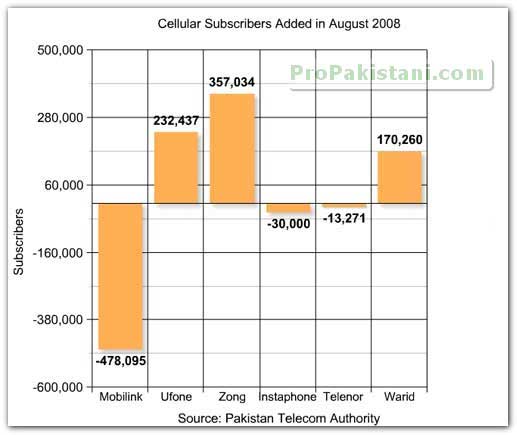 This graph, which is derived from PTA’s statistics show that Zong stood first in August 2008 by attaining 357034 customers. While on the other hands, Mobilink lost 478095 subscribers (I don’t know how it happened, maybe due to millions of unregistered SIMs that got blocked)

It can be said that cellular companies have reached the active chunk of Pakistani market that slightly slowed down their penetration in the big cities. The only idea left unexplored is the rural market, for which I am sure mobile companies have already derived their strategies to expand their services and hit rural community more aggressively.