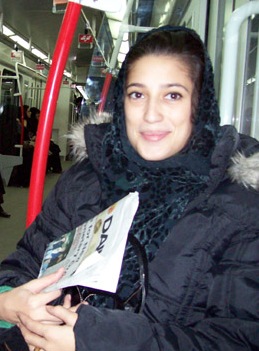 Fatima Bhutto fears that she could be liable for prosecution for her writings criticizing the government, under the ‘prevention of electronic crimes ordinance’ introduced in the shape of a bill before the parliament recently.
Writing in the Guardian on Thursday, Miss Bhutto said Pakistan’s ‘so-called democratic government’ had introduced the bill “to censor our already frightened media”.

According to the bill, she said, anyone found guilty of “cyber terrorism” — an undefined crime — is liable to face the death penalty.

She asserted that the government’s vague bill threatened anyone guilty of “spoofing” or “spamming” or the “character assassination” of any member of state with prison sentences.

“Any of the articles I’ve written critical of my country’s role in the war on terror or questioning the corruption of the state could constitute “spoofing” (the bill doesn’t elaborate on whether it is satire that the PPP government is fundamentally opposed to or simply jolly fun-making).

“The bill is an escalation of intimidation from the state. In Oct 2008 the government announced that the terrorism wing of the country’s Federal Investigation Authority would be tasked with hunting down the “anti-democratic” forces that were circulating YouTube videos and text messages aimed at discrediting the ruling party’s politicians.

Meanwhile, Fatima herself fell a victim recently to alleged ‘spoofing’, ‘spamming’ and ‘character assassination’ by a US tabloid, The National Inquirer, which linked the otherwise very correct Miss Bhutto with many years her- senior- in- age Hollywood heartthrob George Clooney.

Without quoting any source, the NI report says that the two had dated after meeting at some international conference (no date, no venue and no title of the conference). The story also carries a video clip showing the two in separate frames which totally contradicts the implied claim of the NI that Clooney is all set to woo Fatima if she agreed.

Declaimer: This article is  posted in connection with Fatima Bhutto’s concern over Cyber Law and bears no connection, what so ever, with any political cause.