Huawei has not paid bonus, annual leaves encashment and other benefits to Mr. Jehanzeb Taj, who was Manager HR at the company last year.

We had covered a comprehensive story over the topic, however, Huawei has still not paid a single penny to Mr. Jehanzeb despite promises from senior management at the company. Mr. Taj has sent the company a legal notice for his illegal termination and huge losses to him due to Huawei.

In a letter published in a Islamabad based English Magazine ‘Solidarity’, Mr. Jehanzeb has produced email communication between him and Huawei officials.

I seek your support for including my grievance letter against HUAWEI for not fulfilling its written commitments and promises given me to “pay bonus, annual leaves encashment and other benefits due to be paid in return of my service”.

They wasted my valuable time, damaged my career, and shattered my confidence on written assurance and caused financial disorder to me. I want to quote their promises made with me through email, for the respectable readers so that everyone must know and also share with their close ones about HUAWEI as a company.

Following are the scans of Emails, and are re-produced as they were published in Solidarity Magazine. 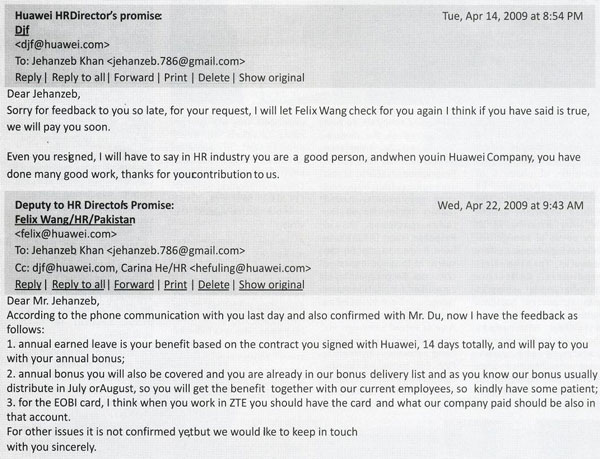 The bonus has been paid in Jul 2009 to all employees but my valuable contributions have been ignored and Aug 2009 has also passed but company’s promises are still not fulfilled. I let the readers and concerned officials to decide and intervene to enable me have my legal benefits and rights, also committed in words by Huawei’s management.

Actually this has become the culture of Huawei to promise verbally and in writing where the employee demands his/her rights and benefits.

Similarly, promises made at the start for salary, probation period, promotion, employment contract type and other benefits are altered when an employee resigns from his/her previous job and joins Huawei, and employees are left with no choice other than frustration and de-motivation.

We tried to contact Huawei’s PR department for their viewpoint over the issue, but we didn’t get any response.