Few days ago, we reported about 1 MB DSL for Rs. 299 in rural areas from PTCL – however, we didn’t know then that it was due to Universal Service Fund only.

As per information we have received, USF is already subsidizing the broadband internet in various un-served and under-served areas of Pakistan. Reportedly, USF will roll out such initiatives countrywide in phases, based on telecom regions in Pakistan.

Unlike telecom services, the bidding for broadband was on achievement of targets, not the roll-out. Here target means, broadband users, and USF pays on per broadband user basis – the amount per user is decided through bidding.

As a pilot project, Faisalabad Telecom Region has started getting the fruit. Following map will help you understand the status of deployment in better way. 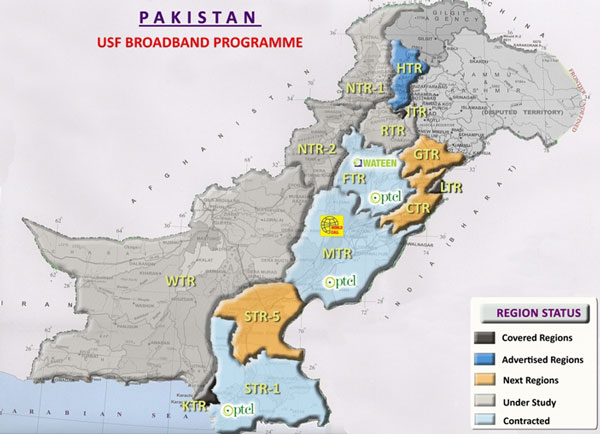 In Faisalabad Telecom Region, PTCL and Wateen won the bid and they gonna provide services in 7 districts, which are as following

After the pilot project of FTR (Faisalabad Telecom Region), Phase 1 will include

You can click these links to know the current status of projects.

For a comprehensive information about what USF is, find out this interview with Mr. Parvez Iftikhar, CEO, USF.