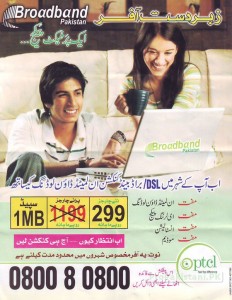 ISPAK in a communication with PTA has requested the authority to check such moves by the PTCL to save total collapse of the broadband industry. ISPAK said that such promotions by PTCL will lead industry to:

When we spoke with spoke with Mr Wahaj us Siraj, Chief Executive Officer, Micronet Broadband, he said that PTCL’s wholesale price of IP bandwidth to ISPs is not less than US$ 150/Mbit if an ISP purchases 1,000 Mbits of bandwidth. Keeping this in view, if ISP’s wholesale price for 2 Mbits is $300 (Rs. 24,000), how ISP can sell same at Rs. 2,000 to an end user.

“PTA is silent on this issue. They’re not supporting industry and leaning towards the large incumbent operator. PTCL is actually trying to kill competition by hook or by crook. If it succeeds in this, which they would if regulator remains silent, it would monopolize the market again and customers would be left with no choice but to use PTCL only” he added.

It merits mentioning here that PTCL has been offering I MB DSL link for PKR 299 (3.6 USD) per month, with subsidiary from USF.

However, it must be noted that PTCL is offering this package only in those cities where there is no other ISP providing broadband services and USF encourages ISPs to offer broadband services in un-served areas by subsidizing the services, through bidding.

In this regards, when we spoke with Mr. Pervaiz Iftikhar, Chief Executive Officer, USF, he said that USF’s aim is to take broadband in un-served and under-served areas of Pakistan. For the purpose, USF conducts a transparent bidding process, where everyone is invited to participate. He further told that USF will provide subsidiary for infrastructure for broadband to winning bidders, but only after reaching target, for instance in Faisalabad Telecom Region, target is 100,000 broadband customers.

Parvaiz Iftikhar further added that it’s PTA’s mandate to regulate the industry – and this particular issue is clearly between ISPAK, PTA and PTCL.

When we spoke with a broadband analyst regarding this, he said that it is true that PTCL’s package is provided only in those cities where there was no broadband before, however, ISPAK’s viewpoint of anti-competitiveness of this package can’t be ruled out. “Price cut in one area will impact countrywide broadband industry, sooner or later, moreover, it’s not that if today one company is not providing services in some cities, then they won’t go there for entire life” he concluded.

We could not get PTA’s viewpoint over the matter.