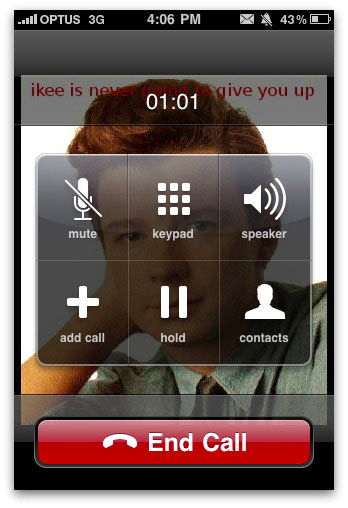 World’s first iPhone virus has been reported, which is creating some buzz in at least Australia right now, however, it is said that world over iPhones that are jailbroken are under threat.

The virus, dubbed the ikee worm, breaks into iPhones, changing their lock screen wallpaper to an image of 1980s pop star Rick Astley with the message: “ikee is never going to give you up”

It was found that virus can only infect users who have “jailbroken” their iPhones in order to allow them to run applications that have not been approved by Apple or those who are illegitimately running iPhone with non-exclusive operators.

The “ikee” worm, as it’s being called, takes advantage of the fact that jailbroken iPhones with SSH installed all have the same default root password of “alpine,” and once in the system it changes your wallpaper to an image of Rick Astley and then tries to install itself on other jailbroken iPhones on the network.

IT security and data protection company, Sophos, hasn’t confirmed any infections outside of (Australia), and to be clear, this worm can’t get to stock iPhones or jailbreak owners who haven’t installed SSH – but if you’re running a hacked phone we’d say you should change that root password just to be safe right away.

So if you have installed SSH, here’s how, to change the password

It should then prompt your for a new password – type one that you’ll remember. There’s no easy way to reset it if you forget it.