Telecom industry is responsible for huge amount of Imports, especially in area of Mobile Phone sets, accessories along with Telecom Equipment.

These imports are burden on national economy, however, we can’t avoid them as they are responsible for many other benefits that get from Telecom sector.

Government of Pakistan tried to cut down at least mobile phone import, which it succeeded in a way (evident from the graph below), by imposing taxes on import of mobile phone sets in 2008-09 budget, however, taxes were lifted in 2009 budget due to sheer pressure from Mobile Phone manufacturing representative offices in Pakistan.

Along with taxation, saturation, inflation and political scene in Pakistan happen to be another factor impacting the imports of mobile phone handsets. On other side, we are witnessing a smooth growth over the period for import of Telecom apparatus, which has hit USD 1470 million mark in 2008-09.

Following is the chart that represents certain data regarding the Telecom imports of Pakistan during last five years. These stats are till year ending 2008-09 (July 2009) 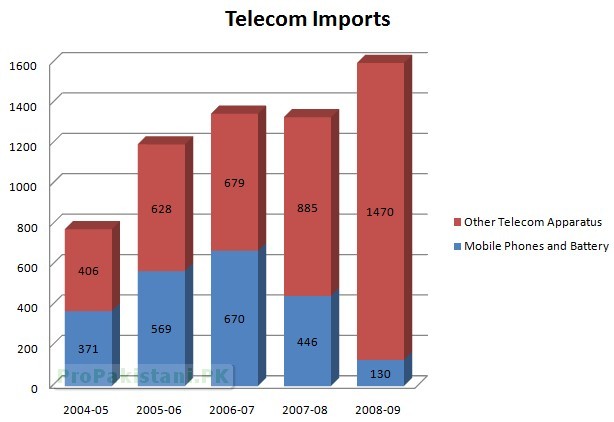