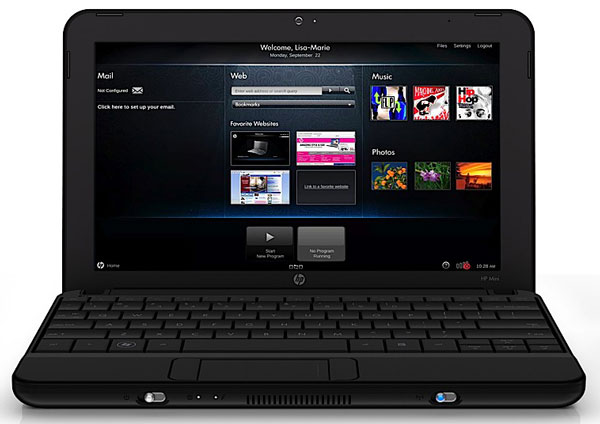 As discussed in earlier post, we had the privilege of the Chef Special that very evening. Mini 110 was served in the platter. To me it was something new as I didn’t had the privilege of working on netbook earlier but most of the guys were aware so the discussion didn’t entered in the technicalities in the first place. Mr. Khalid himself quoted at one stage,”You guys are tech savvy, so I don’t like to take dive in binary world”. Indeed he was right to the core of this meetup. This meetup was not about HP mini only, it was more about connecting with bloggers.

Since HP mini was meal of the eve, so allow me to write a few words about the netbook.

A few words, as I say it,  because it already carries the weight of heavily placed presence on the internet. Geeky!! Much has been written about this specific netbook on internet. Most of the known websites have reviewed this netbook. To be honest, I read all of them to know the technical part of HP mini 110.

They all did the bench mark tests and the comparison evaluation to take into consideration the strengths and weakness. In the end all of them had the similar conclusion i.e. “Worth a dime!!” Now, I could have written all of those stuff by cleverly choosing the right content to copy from them but I didn’t. Thing is that I will write what I found in the meetup only. Not more, nor less!!. Truth be told!!

OS – Nothing, Anything, Everything

QuickWeb is one thing that fascinated us all. More than anything. The first statement what I uttered after hearing about this functionality was “Fit hai Yaar!!“.

HP gave the users an option of getting connected to the internet without even booting the OS. Amazing as it feels. But folks, thats real. In QuickWeb space, HP included some applications like Browser, Chat , Skype, Twitter, Facebook, Photos, Music etc.  Tools that we need when we connect to the internet. In reply to my query that would we be able to get the file from the hard disk, they said “YES!!!” If you still want to and need to boot up the OS and do some official work then you just need to click on START MENU in QuickWeb Space.

Now, How HP did this? Well, I will leave it for you folks. If you are really curious and want to get hands on this very netbook then you will surely surf the internet after going through the post and you will come across QuickWeb definitely. So, read out the technology behind QuickWeb and share with our valuable readers what you have learned. Right Folks?

If you are a student and you take your netbook to Uni but you work on desktop computer back home, then you need to have this feature installed in order to sync the documents and emails between the two systems.

HP cloud was yet another ingredient which didn’t went through our tummies too. It was explained as “A feature through which you would be able to connect to HP cloud and share your works and services over cloud”. Plain and Simple as A B C.

Regular ingredients are what we find in every other netbook. So, there is nothing for me to go into boring discussion : -) Design was as beautiful as it should be. Great Keyboard touch and as light weight as netbook should be. Mr. Khalid at one stage gave us goosebumps by saying that he played War Craft 2 on this very notebook. Mouth Watering indeed!!!

Fella bloggers who had other netbooks and laptops had their arguments passed in favor of their in-use netbooks but HP tried to convince them with their own mini series netbook. HP mini 110 has Combo headphone/mic jack which actually is one glitch that I didn’t liked. Means, you won’t be able to speak through mic and listen through headphones at the same time. HP needs to change this seriously.

Before presenting you all with the evening menu RATE LIST, I will conclude with my two cents in favor of HP mini 110 and SHOUT OUT LOUD WORDS “BUY IT!!!”