Mobile Number Portability, or MNP as we all know it, allows a Mobile phone user to switch to a new operator (recipient) and avail its services while still retaining his old-operator (donor)  number.

Number portability is always a state/regulatory-body implementation which keeps accord among the network operators participating in it.

In Pakistan, all the five GSM, AMPS and landline network operators participate in the MNP, which is as said, Government harmonized. In Pakistan, MNP system is managed by Telcordia Technologies (a company emerging from the famous Bell Systems Ltd.)

Yes, the word ‘System’ here indicates the existence of a physical entity or rather a software solution linking several vital bodies. Leaving aside all the technical terms and jargons; in most simple manner, the link architecture for a MNP-Server (as we will call it) can be drawn as:

The server is accessible to all networks and its main functions are to maintain a database record of the ported numbers, and to assist the networks in routing the incoming traffic (voice and text). This is basically done by maintaining a memory basket, technically called ‘Central DataBase (CDB)’ of the ported numbers.

Whenever a number is ported from a network to another, a set of associated information is stored in the CDB, which is then accessible to all the other networks as well. 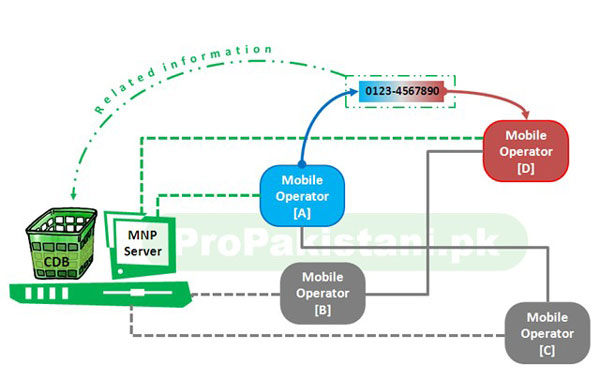 To understand how MNP works, one must know what ‘Related Information’ is transferred to the CDB when a number is ported. Not going into deep details; there are a couple of terms that must be known i.e.

A SIM, as most of us know, stands for ‘Subscriber Identity Module’. Generally, it is reflected of as a card that holds the subscriber’s mobile number. Actually it doesn’t. SIM basically holds the IMSI (International mobile subscriber identity). An IMSI is a 14-digit number that uniquely indicates presence of a SIM card.

No two SIMs in the world would have the same IMSI. Your mobile number, or MSISDN (Mobile Subscriber Integrated Services Digital Network) as it is technically known is mapped against the IMSI and the map is known by the SIM issuing network operator. The mobile numbers we use (e.g. 0300-1234567) are illusive by nature; a cell phone uses the IMSI to communicate with its parent network.

ICC-ID (Integrated circuit card ID) is a 19 digit number that signifies the physical existence of a SIM card and acts more like a product serial number. It is hard-written and dies with the SIM. The ICC is just like the IMEI code of a mobile instrument and is printed on back of the SIM as well.

To clear things up a bit, try to understand the scenario using an analogy:

You use your name [MSISDN or the phone number] in your everyday communication. Which by itself cant be unique, but combining it with your sir-name and address will make it distinctive. Like your mobile number combined with network code and country code is unique across the world.

However your university (a network you are a part of) still uses your roll number in all the official settlements (which may or may not be accompanied with your name). Why not the name itself? You can figure it out yourself. Other universities (other networks) on the other hand will still use your name + sir-name + address for referring you, not your roll number.

I shall explain it by the example of losing your SIM. If you ever had lost one, you are issued a new SIM with your old number. The operating company simply de-maps your MSISDN off your lost SIM’s IMSI and maps it against a new IMSI. So you shall have a new SIM, but old number. Similar is the case with a university re-admission case. If a student previously expelled is granted a new admission, he is allocated a new roll number, but the name still remains the same.

Now, one might predict that MNP is as simple as it looks. De-mapping the IMSI off the donor operator’s IMSI and mapping it against the recipient’s. But the problem is that the IMSI and MSISDN are network dependent and cant be cross mapped. 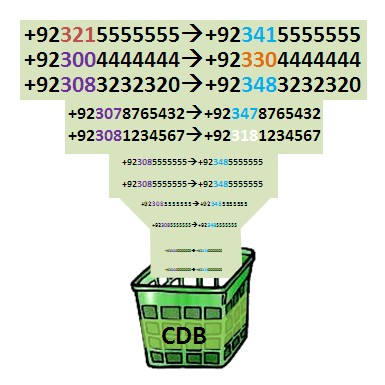 The database, as earlier stated is then accessible to all the networks so the incoming traffic can be routed to the new number.

After the nation-wide implementation of MNP, every network first queries the MNP-Server before establishing a call so that it can know to what number and network the call must be routed. MNP in short, establishes a user-transparent call divert service, but without using the donor operator’s resources.

Consider the case of  number ported from operator [A] to operator [D] as explained in figure-2. Now if a user of operator [B] will call that ported number, the call shall be routed as shown in the figure below. 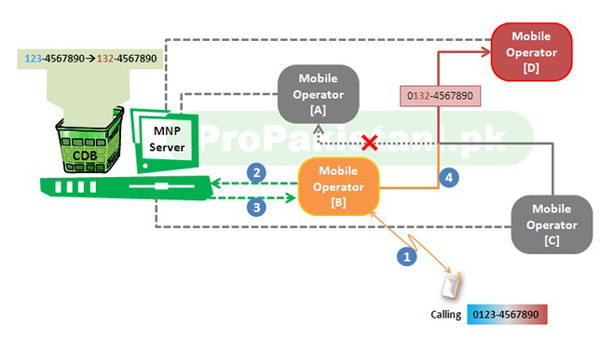 Mobile operator [B] will first query the MNP server about the status of the number to be dialed. Since the number is ported, the server shall reply with a divert number. The call will therefore be routed to the recipient network, the Operator [D].

In case a called number is not ported, the MNP server shall not respond an affirmative nod, and normal call routing shall take place.