PTA’s in its latest research has predicted 2014 as estimated depletion time for IPv4 for Pakistan. Authority has recommended the industry to adopt IPv6 before the bread limit is reached.

IPs are used in networks for computers, devices and applications to connect with each other. IP version 4 or IPv4 only provided for approximately 4 billion addresses with a current primary allocation granularity of /8 blocks, a limit that is estimated to be reached before 2012.

The transition of the Internet to IPv6 is the only practical and readily available long-term solution to IPv4 address exhaustion. Although the predicted IPv4 address exhaustion approaches its final stages, most ISPs, software vendors and service providers are just beginning IPv6 deployment. A 2008 study by Google indicated that IPv6 penetration was still less than one percent

IPv6 Monitory Group in its report has asked ISPs to transit to IPv6. Group has advised PTA to Establish a National Internet Registry (NIR) to overlook the IP and DNS management issues in the country.

According to APNIC statistics, till date, a total number of 6,839 /24 blocks or almost 1.7 million IPs have been allocated to Pakistan. 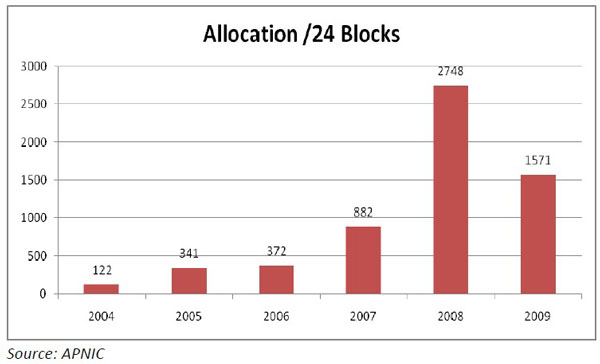 IPv6 Monitory group, in its report, has said that Pakistani ISPs are left with approx 10% of total assigned space, meaning that around 170,000 free IPv4 addresses.

Group anticipates IPv4 allocations on higher side for next 2‐3 years. It has predicted that approx 12557 /24 blocks or 3.2 million IPs will be in-use in Pakistan by 2012. 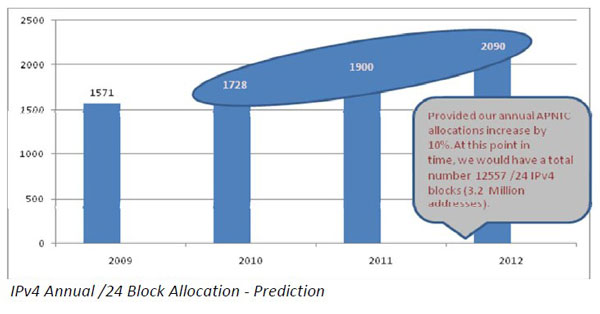 Assuming the same number of free addresses Pakistan has now by today (10% of the total space), Pakistan may have around 320,000 free IPv4 addresses available for further allocation by the end of 2012, said the report.

These 320,000 addresses would be enough to cater Pakistan’s National requirements for at least one and a half year.

Basis on this analysis, Monitory group predicted that full depletion IPv4 addresses in Pakistan would happen somewhere in mid‐2014.

By full depletion it means that not a single operator in the country would have any free IPv4 address to assign.

Pakistani ISPs have been acquiring IPv6 pools – which are very low in number. These IPv6 pools are not in production, but are for testing purpose.

Full report can be downloaded from here