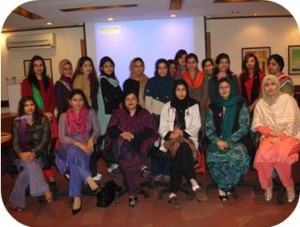 They say prevention is better than cure but in some cases, early detection can actually save your or your beloved’s life. Unfortunately, in some parts of our country, breast cancer is still considered a taboo issue dared to be discussed out in the open but the fact remains, if you won’t openly discuss, you won’t be aware and if you won’t be aware, you won’t be able to cure yourself until it’s too late.

Breast cancer is not only fatal but it is also one of the most common forms of cancer that is killing women not only in our country but across the globe. The occurrence of breast cancer symptoms has actually risen over the course of time. It is one silent killer that is taking lives of hundreds of women in our country irrespective of their class or creed. One of the biggest reasons is ‘unawareness’ of women about this dreadful disease.

We need institutions and organizations to join hands to promote Breast Cancer Awareness Campaign in our country. Both local and multinational companies must actively participate in spreading awareness about this disease among their female employees.  An exemplary CSR initiative has already been taken by Mobilink in this regard. Mobilink has been  actively promoting Pink Ribbon Breast Awareness Campaign since 2008 and in last two years Mobilink has educated over 250 female employees about breast cancer by regularly hosting Pink Ribbon Breast Cancer Awareness Seminars in Mobilink offices across Pakistan.

Mobilink has not only supported Pink Ribbon Campaign to spread awareness among their female employees but they have gone extra mile by promoting the Breast Awareness Campaign to their customer base as well. Each year Mobilink sends flyers to its customers inserted in their bills in hopes of spreading breast cancer awareness to a much wider audience. Mobilink also contributes towards Pink Ribbon fund raising campaigns by frequently purchasing their merchandise on Pink Ribbon seminars.

We need more of socially responsible companies like Mobilink to come forward and support health related campaigns in our country. With this aim, let us all join hands to promote Pink Ribbon Breast Cancer Awareness Campaign and many other health campaigns of such like to ensure a healthy Pakistan. Let us declare this year  be the Pink year for Pakistan. Let us dedicate 2010 to the women of our nation.