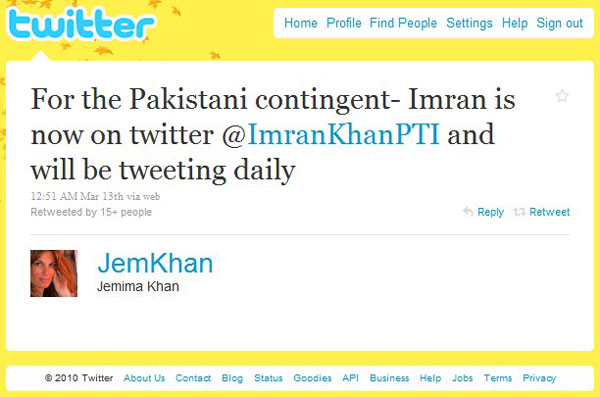 Imran Khan, former cricketer and a politician now, head of Pakistan Tehreek e Insaf, has joined twitter. Unlike facebook, Twitter is not well occupied by Pakistani Politicians, at least as of now.

Imran Khan’s entry to Twitter was announced by his ex-wife Jemima Khan.

He has got 700 plus fans in one day, let’s expect more in coming days.

Imran Khan’s time-line on twitter mostly talks about his justifications about pro-taliban allegations, looks he was soon bombard by allegations from Pakistani twitterers .  Like Gen (r) Musharraf, he may need to get to some Social Media agency to tackle his twitter account.