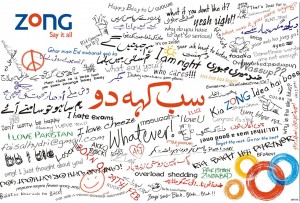 Pakistan gears up to celebrate the ‘Sab Keh Do’ Day for the second year on April 12, 2010. The Day which focuses on open communication and maintaining relationships is a unique initiative.

The ‘Sab Keh Do’ Day celebrates the importance of self-expression, by encouraging people to express their views and thoughts – just as the tagline suggests. This Day welcomes and encourages all people – children, adolescents, housewives, professionals, workers of all levels, in short, each member of the society – to say what is on their minds.

The objective of the ‘Sab Keh Do’ Day to promote a positive change in society by paying attention to open lines of communication, honesty, creativity and increased dialogue among the public. Research has shown that poor communication fosters misunderstandings, impaired trust, disagreements, ill feelings and conflict among people. Sab Keh Do aims to create a culture of honesty and respect, and promotes love and peace, by encouraging people to express their feelings openly, clear misunderstandings and build positive communication.

In an increasingly globalized world, with the facilities of modern communication technologies available to us, getting in touch with family and friends who are in different cities or countries is as simple as making a phone call or sending an SMS.

When asked how she felt about this activity, Saira Ahmed, a student of A’ levels, said, “This is indeed an interesting activity, which not only cultivates talent and creativity in children and but also gives us an avenue for self-expression. There is a need for more such innovative and progressive activities in schools in Pakistan, to foster creativity and healthy competition among children. I strongly believe that this Day, celebrated year after year, will definitely bring about a positive change in society.”