Thanks to Universal Service Fund, 21 cities in southern Punjab are now broadband equipped with 25,100 customers already on board since the roll-out started three months ago.

Out of 37 planned cities, 21 cities were covered in just 3 three months.

This demonstrates the immense speed of ISPs for spreading broadband in un-served land of Pakistan. For newly added cities, not only the home users will get the advantage but high speed internet infrastructure is going to connect businesses, government and semi government entities in the region as well.

Other potential beneficiaries, who could benefit

Those who don’t come from these districts, and are still not served with broadband internet, don’t worry, because, USF has planned big to take broadband to your home. Check following map to get a glimpse of broadband project proceedings. 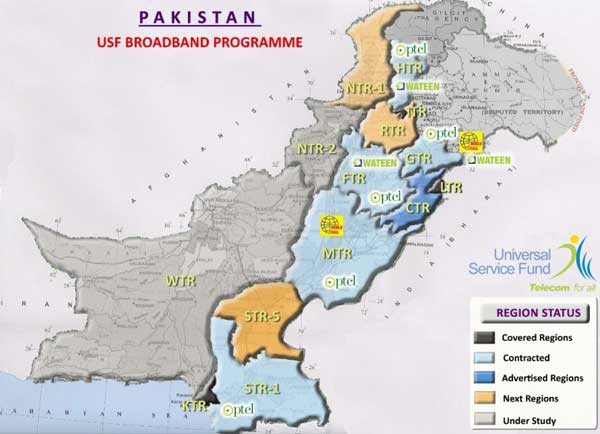 It is may be recalled that USF provides subsidy to ISPs for providing broadband internet to regions where otherwise business is not viable. This subsidy is based on per customer base, for instance, a target (for southern Punjab its 100,000 subscribers) is given to ISPs, when achieved subsidy on each customer is given. Subsidy is decided through bidding.