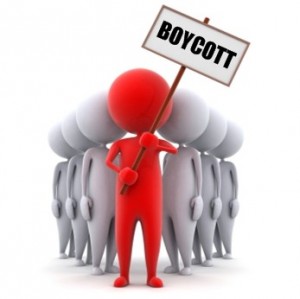 There is this Facebook page that is holding a so-called contest for Prophet Mohammad’s drawings (Sallallahu Alayhi Wa-aal-hi-Wasallam).

This page is clearly violating the terms, by spreading hatred and disrespecting Muslims and their values.

We have seen riots and protests in past when western media published such drawings. “Freedom of Speech” what they call it is no explanation, particularly when they know that their such deeds harm Islamic beliefs.

These campaigns are clearly more like a tease than of “Freedom of Speech”, and an obvious demo of mocking a religion, which for sure is not allowed by any religion of the world.

An SMS campaign in Pakistan is on the rise to boycott Facebook, at least on May 20th, 2010 to protest against this act of Facebook for not banning the page till now.

Recently, Facebook has been very strict for Fan Pages about Islam. Just this week we saw many Fan Pages getting banned from Facebook due to their relation with Islamic content.

You can report the page, or raise your voice with whatever channel available to you.