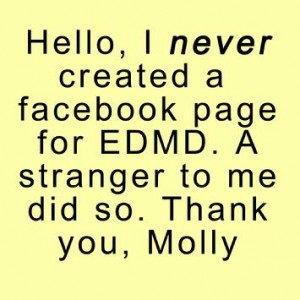 American cartoonist whose work inspired the controversial “Everybody Draw Mohammad Page” on Facebook has condemned the effort and issued an apology to Muslims.

Molly Norris, of Seattle, drew a cartoon in April to protest the decision by the US television channel Comedy Central to cancel an episode of the popular show “South Park” over its depiction of the Prophet Mohammad in a bear suit.

An “Everybody Draw Mohammad Day” page quickly turned up on Facebook but Norris, writing on her website at mollynorris.com (this URL is banned in Pakistan), said she had nothing to do with it.

“I did NOT ‘declare’ May 20 to be “Everybody Draw Mohammad Day,” she said, adding that her idea was satire but “was taken seriously, hijacked and made viral.”

“I never started a Facebook page; I never set up any place for people to send drawings to and I never received any drawings,” she said.

“The vitriol this ‘day’ has brought out, of people who only want to draw obscene images, is offensive to Muslims who did nothing to endanger our right to expression in the first place,” she said.

“I apologize to people of Muslim faith and ask that this ‘day’ be called off,” she said.

Million Dollar Question: Then who fanned the fire? Some Jewish lobby? or any other Anti-Muslim community or maybe Ghosts?

Also if the damage can be undone?