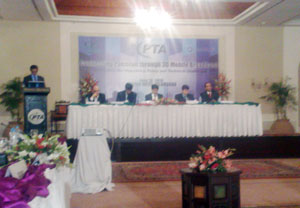 Minister In-charge for IT and Telecom, Sardar Mohammad Latif Khan Khosa was the chief guest, while IT Secretary Naguib Ullah Malik was the guest of honor. PTA Chairman Dr Mohammed Yaseen chaired the panel discussion.

Chairman PTA, qualcomm, CDMA forum representatives addressed the seminar along with their presentations.

Network companies naturally advocated the needs of 3G and how it will revolutionize the mobile broadband in the country, but on other hands, cellular operators were not sure if 3G makes a good business case or not.

PTA, as a regulator, thinks 3G has an opportunity and it should be explored.

Mr. Latif Khosa, Minister of for IT and Telecom at one occasion publicly said to Chairman PTA that if PTA can arrange 1/5th of the spectrum auction price of India (USD 15 billion), i.e., USD 3 billion, then he can ask the government to auction 3G licenses right away. (He gave the chairman an almost impossible mission to accomplish)

Apparently, government is waiting for the best time to reap the maximum monetary value of licenses. Some industry experts fear that this wait may deprive the country of 3G technology altogether.

It merits mentioning here that recent 3G auction in India has put more pressure on PTA follow the suit in Pakistan. But difference in business scenarios in both countries, in-decision by government and reluctant attitude of cellular operators here is delaying the process.

PTA is planning another two seminar on same topic in Karachi and Lahore in next month or two at most. It maybe recalled that PTA has conducted set of seminars on 3G in the past as well.

On additional note, for those who want to study the pros and cons of 3G for Pakistan’s market, a very insightful discussion is going over the same topic on TGP.

It is estimated that cellular companies will have to invest half a billion dollar each for 3G license and to lay network in three major cities in Pakistan. One segment of industry say that ARPUs are too low to invest half billion dollar (at least), while others refer to GSM boom and say one has to create a need to make it a requirement – maybe now Pakistanis don’t ask for 100 MB link over mobile phone, but they may love it once they are offered such a service.