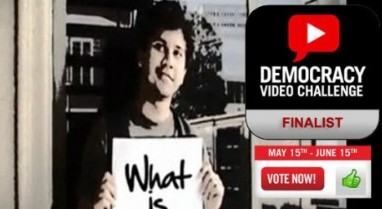 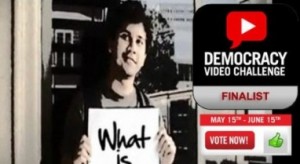 Faraz Siddiqui of Pakistan has made into the final round of Democracy Video Challenge on YouTube, an online video contest that builds a global discussion on democracy.

Siddiqui’s video ‘Democracy is the message by people’ was shortlisted by an independent jury in the semifinals along with other 18 contestants for public vote on YouTube, www.youtube.com/democracychallenge to decide the 6 final winners, one from each region.

People around the world can now vote for their favorite videos until midnight GMT on June 15, 2010. Winners will receive an all-expense-paid trip to Los Angeles, New York and Washington DC in September to claim the prize.

Since its launch two years ago, more than 1,600 people from 111 countries submitted entries and spurred the online engagement of at least 1.5 million people.

Siddiqui is up against two Nepalese contestants in the South and Central Asia region. Siddiqui belongs to Karachi and also runs a graphic design company called Collage.

The Democracy Video Challenge is a part of “Democracy is…,” a global conversation created by a unique public-private partnership that includes democracy and youth organizations, the film and entertainment industry, academia and the U.S. government. It leverages social networks and various creative tools to engage people around the world to share, consider, debate, and learn from diverse perspectives on democracy.

The Democracy Video Challenge is collectively organized by: