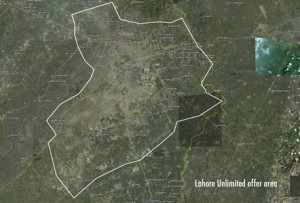 Zong has launched Location Based Charging (LBC) ‘Lahore Unlimited’ in Lahore – a special promotion – to maximize benefits for Zong subscribers in Lahore.

Through this offer Zong is offering deals of the deals to Lahorites i.e. you can make unlimited on-net calls and unlimited SMS in 199+tax, not just this, to double the heat customers would also get an amazing SMS offer, that too unlimited for whole month.

In order to subscribe for this ongoing promotion which starts from 13th June,

The promotion has to be activated monthly and will be available on all packages. All calls to ZONG numbers will be covered by this promotion as well as all SMS to numbers on-and-off the ZONG network.

This is the first time that any Mobile phone company has launched such a facility in Pakistan. Zong’s LBC in Lahore is designed to effectively utilize ZONG network and expand its subscriber base. ZONG has introduced concentric layer technology – by further strengthening its facilities and already strong network quality in Lahore.

ZONG is determined to add value to the lives of its subscribers by making it possible for them to remain in touch as often as they like.

“Providing our subscribers with the best possible rates, simplicity and a wide range of services is the hallmark of the ZONG philosophy. ‘Lahore Unlimited’ will make keeping in touch more affordable for subscribers in the city with anyone across the country,” says Salman Wassay. “We believe the city of Lahore has immense potential due to our existing subscriber base and our superior network quality.” No one in the cellular industry has offered this facility so far and we consider it an innovative gift for the subscriber of Lahore from ZONG.