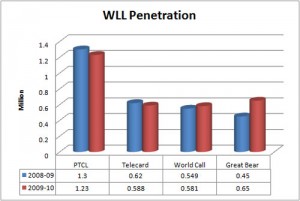 In this era of wide communication, great competition war is going on in telecom sector especially in wireless communication. Due to this tough war wireless sector has almost ceased its growth in just six years after its commencement as the number of users continued to decline in the country despite constant falling rates and free minutes offers and multiple calls packages by operators.

The subscribers’ growth in wireless local loop (WLL) sector witnessed squeezing growth of 1.6 percent in the fiscal year 2009-10 as compared with the 17 percent growth witnessed in last financial year 2008-09.

The over-competitive sector has become a double edged swords for the sector in which the competition is observed inflexible, not only with its market players but also with cellular operators in many region.

As per PTA’s de-regulation policy for the sector in order to maintain competition among market forces, PTA has awarded 93 licenses to 16 operators for 14 telecom regions of the country.

The sector has been endorsing in those areas where the deployment of landline infrastructure is difficult particularly in far-flung mountainous and deserted small cities and villages.

The rise and fall of WLL sector

Since 2003, the emergence of nine operators in the market posted significant growth in the subscription within the couple of years, despite the landline sector was witnessed its peak in terms of subscribers and revenues alike. However, the WLL sector appeared as an alternative of landline connection with wire-free solution with cutting edge technology, CDMA, in the market.

The WLL sector is seemingly on the downward track as the subscription growth has continued to shrink coupled with falling income returns of the operators. The total number of subscribers is 2.658 million in the country and its tele-density reached 1.6 percent by June 2010.

The sector penetrated in 12,000 cities and villages of the country including areas of Azad Jammu and Kashmir and Gilgit Baltistan.

PTCL has also captured the largest share of the market but its users’ base has posted constant contraction. In 2009-10, PTCL based reached 1.23 million as against 1.3 million of the last year. Telecard subscribers’ base declined to 0.588 million by June 2010 as compared with 0.62 million in June 2009. World Call subscribers’ base increased to 0.581 million in 2009-10 as against 0.549 million from 2008-09. Great Bear has improved its base amazingly and increased to 0.65 million in July 2010 as against 0.45 million July 2009. The rest of other operators have shown flat growth in the current financial year.

Presently, only seven operators are working. Two of them have sold out their spectrum to broadband operators and couple of operators also is also mulling to windup their wireless services in near future.