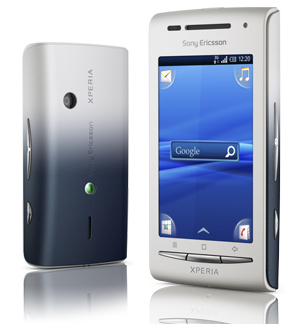 It is loaded with 600 MHz processor with only 128 MB internal storage available for the handset and up to 16GB expandable memory. Its processor is quite well, and speed is almost equals to android Google G1.

Internal storage is somewhat low as compared to other phones available in the market with the same range, but 2GB expandable memory card is included in package for extensive memory usages (depends on seller offer).

Its display is ready with TFT capacitive touch screen which is geared with 16M vivid colors in the size of 320×480 almost (3.0 inches) in all, Though its display is bit lower as compared to Xperia X10 but it has good vivid depth of colors. It is also ready with basic sensors like Accelerometer sensor for UI auto-rotate.

Like many other smartphones, it supports different mediums to get connected with friends and family:

As per its specifications, it seems like; Sony Ericsson Xperia X8 is designed for the mid-range purchasing segment of the market. It may not be as much expensive as other new android based smartphones. It may intense the competition especially, if it will compete Samsung Corby and other mid-range touch screen smartphones as an edge of Android OS.

We cannot confirm officially on its availability in Pakistan, but you may estimate its price on the basis of its specifications, it price may range from PKR 18,000/- to PKR 30,000.

Disclaimer: Please be informed that, Websites mentioned in the articles are only for citing references. Author is not responsible for any purchase / sale /exchange/loss/Price Quotation/ decision made; but not limited to, after reading this article.