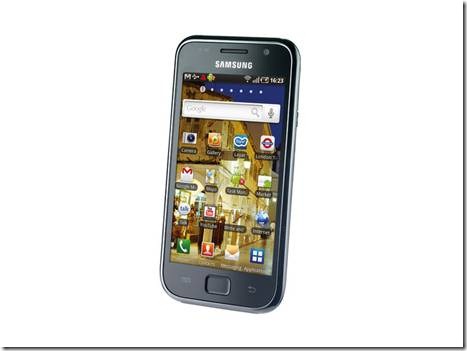 It takes a brave manufacturer to launch a flagship phone at the same time Apple unleashes its latest iPhone, but that’s exactly what Samsung did. Not once, but twice. First with the Samsung Wave, featuring its own Bada OS, and then with its high-end Android phone, the Galaxy S.

That might put a bit of a dampener on sales, but what it can’t do is dent our opinion of its latest handset: where the Wave was disappointing, the Galaxy S is a cracker of a phone.

Not that you’d know it from simply looking at it or picking it up. It’s far from the design triumph that the iPhone 4 is, and it isn’t as nice to hold as the HTC Desire either. It’s light, a little bit plasticky, and the chrome effect trim that curves around the edge of the front fascia makes it look and feel like a cheap, knock-off copy of the iPhone 3GS.

When the Galaxy’s screen sparks searingly into life all such thoughts are immediately banished. It’s huge, measuring 4in diagonally, it boasts a high resolution of 480 x 800, and it uses the same “Super AMOLED” technology as featured on the Wave. It’s very, very bright – more so than even the HTC Desire – and the most colour-intense screen we’ve seen on any smartphone.

But try as it might, it still can’t quite rival the iPhone 4 all round. Whites aren’t quite as pure, and the latter still wins out on sheer resolution. Due to the pen-tile arrangement of the sub-pixels in OLED screens, which means effective resolution isn’t quite as high as the quoted resolution, it’s noticeably grainier. The larger screen size, however, ensures that small text is just as readable.

Nearly as impressive as the screen is the sheer performance of the Galaxy S. Thanks to the 1GHz Samsung Hummingbird processor, it’s the quickest, slickest, smoothest Android phone yet. It hardly stuttered, no matter how much we asked it to do. Over a fast Wi-Fi connection it loaded the full BBC home page in an average of nine seconds, level with the HTC Desire and iPhone 4.

In the SunSpider benchmark it completed the tests in 15.5 seconds compared to the iPhone 4’s time of just over 10 seconds. Its score of 93 out of 100 in the Acid 3 standards is good, but again falls slightly behind the iPhone 4’s perfect 100.

With battery life it’s the same story. We recorded 50% capacity remaining (rounded to the nearest 10% for fairness) after our 24-hour test, in which we make a 30-minute phone call, force the screen on for an hour, download a 50MB podcast and then play it through headphones for an hour. And all the while, we’re polling for new email every half hour.

That suggests the Samsung Galaxy S will survive a day of heavy use and maybe two days’ light to moderate use if you’re really careful; once more, it falls slightly behind the iPhone 4.

The 5-megapixel camera lags further behind the iPhone’s, however; shots looked a lot softer with no LED to help out in low light. Responsiveness is good, and features such as image stabilisation and touch-to-focus add to its appeal, but because the auto focus doesn’t work as well it’s less reliable than the iPhone’s camera in terms of getting the shot you want. The video mode is better, however, shooting crisp, colourful footage at 720p, 30fps.

Call quality was absolutely fine and the speaker is good enough to project Google Maps’ satnav voice instructions at top volume without distorting or breaking up. It’s interesting to note, however, that just as the iPhone 4’s signal bars fall away if gripped in a certain way, the same happens with the Samsung Galaxy S.

In some locations we were able to get the signal indication bars at the top of the screen to fall from four down to nothing, simply by wrapping a hand gently around the phone’s bottom half. In general use, however, we experienced no dropped calls, and call quality remained solid, as did data connections. We don’t think it will be an issue for most users, but if you do order one and live in a weak signal area, it’s something to look out for.

In terms of its hardware, then, the Galaxy S is hard to fault. The software, however, is harder to pigeonhole. In many ways it’s brilliant.

The Swype text entry option, for instance, allows you to slide your finger over the letters of the onscreen keyboard to create words (instead of tapping) and, as we discovered at the launch of the device, it works brilliantly. See the video below for a demonstration.

Excellent word completion helps it to reliably predict what you intended to write, even if you’re not that accurate with your traces. When you come up against a word that isn’t in the dictionary, it’s just as good: simply tap it out normally, then select the word in the resulting pop-up menu to add it to the dictionary for future use, or simply hit Space to continue.

It really takes mobile phone text entry to the next level, and it’s accompanied by a good selection of pre-installed apps. We particularly liked Text and Go: a notepad app on steroids that acts as a hub for text messaging, memo writing, and even social networking status updates.
Also thrown in is ShareAll, a media-streaming tool that lets you play music and video files from shared network locations to the phone, from the phone to compatible DLNA streamers or from shared locations to DLNA streamers. Think of it as a souped-up, networked remote control. You also get Aldiko (an eBook reader), the enhanced reality viewer Layar, driving game Asphalt 5, and ThinkFree Office, which allows you to view and edit documents. We shouldn’t forget the inclusion of Google’s free turn-by-turn satnav as well.

Samsung’s Android customisations, meanwhile, are subtle but useful. Pull down the status menu from the top of the screen and you’ll see shortcuts for turning Wi-Fi and Bluetooth on and off, plus a pair of buttons to put the phone into silent and vibrate mode.

Along the bottom of each of the Galaxy’s seven horizontally scrolling home screens are shortcuts for the phone screen, contacts, texting (which offers a threaded view) and applications. More important, however, is the fact that the Galaxy S runs Android 2.1, which means enhanced Exchange support.

The social networking tools are pretty good too. They’re not quite as all-encompassing as HTC’s Sense equivalents, offering only MySpace, Facebook and Twitter feeds, as well as contact and calendar synchronisation. There’s no push option for updates and the phone only lets you check once an hour for updates.

But the contacts view is very good, successfully marrying information (including photos) from all sources and it attempts to automatically link duplicates too. We’re particularly fond of the ability to view recent updates, phone calls, texts and even a person’s social networking media via his or her contacts entry.

There’s no Flash support, however, and we have a big beef with the desktop synchronisation application – Samsung Kies. Mimicking a desktop within a window, this facilitates everything from media transfer to firmware updates and includes a whole load of extra features from disc burning, video conversion and Outlook contact sync to basic photo editing.

It even includes its very own Samsung version of Windows Explorer, which you use to browse the contents of the phone’s 8GB integrated storage. It’s terribly clunky.Fortunately, once installed you can use Windows to chuck files back and forth instead.

Samsung Galaxy S is being sold at Rs. 44,990 at HomeShopping.pk

Combine that with the gorgeous 4in OLED screen, lightning-quick performance, and an excellent software complement (boosted by the huge repository of downloadable apps from the Android Market) and you have a high-class alternative to the iPhone 4.

We doubt it will dissuade those who have their hearts set on one of Apple’s handsets – the industrial design isn’t as good, the camera is a notch behind, and neither is the music player software as elegant – but if you don’t have the cash for an iPhone 4, or simply don’t like Apple, this is very nearly as good.