Today we saw the heights of deceptive activities going on in our society, when an individual named Aftab Ahmed, so called director projects of a new cellular company, published an advert in Daily Express, Lahore – asking the general public to offer their commercial and non-commercial lands for tower installation.

This guy, when called, claims that a new cellular company is starting its services in Pakistan and needs space for tower installations in cities including: Lahore, Okara, Depalpur, Burewala and Sahiwal.

When the trapped callers show their interest for offering his free land, the guy asks for the advance payment (or call it commission) that is necessary to get the process going.

Following is the advert published in Express Lahore: 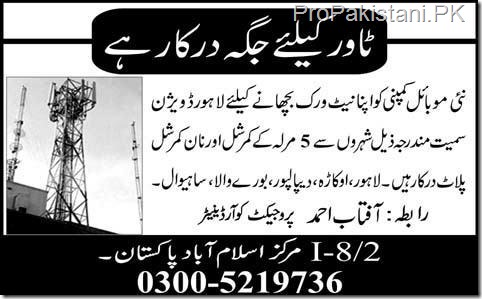 General public may not be aware of this new cellular company entering in Pakistan, however, Daily Express, a media company that would be well aware of the fact that no cellular company is starting new operations, demonstrated its utter mental state by not judging the intents of this advert and published it.

Pakistan Telecommunication Authority must probe the instance, and should check with PEMRA on why Express published such an AD.

PTA should also initiate legal proceedings against Mr. Aftab Ahmed, who is clearly deceiving people to make illegal money. They may use the advertised number to reach this person or otherwise information saved with publication for booking of advert can help.

Pitiful to note here is the fact that it is largely known to general public that commissions for land acquisition is usual routine for even legitimate tower installations. Cellular companies must tighten its policies for its land acquisition guys to avoid any chance for commissions. A helpline number to report violations can be handy.