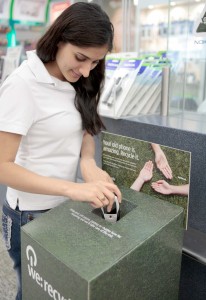 Pakistan has become 86th country in the world where Nokia has launched its recycling program, through a press event in Karachi.

“Take Back” program will have recycle boxes at all 9 Nokia Care centers across the country. Along with, there would be 400+ collection points and a Mobile van in Karachi to serve urban mobile market.

The initiative is launched to invite the mobile phone users to recycle their old phones.

Nokia isn’t accepting only Nokia made models, but also Samsung, Siemens and other makes are also encouraged to be dropped into Recycle Boxes.

Moreover, customers can drop old batteries, chargers or any other accessories in drop boxes too.

When asked about any incentives offered to customers or society in return, Nokia said that there are no incentives for customers in this. They will have to drop their phones for no-return at all!

So there is no monetary advantage involved here. Nokia assumes that it’s the customer’s social responsibility.

However, for society’s betterment, Nokia said that it will re-invest money saved through recycling, which ultimately will help company bring better devices at low cost.

In response to a question that there are already options available to customers where they can sell their old/useless phones for Rs. 200 or so, Nokia said “Naiki ki koi keemat nae hoti”.

During the briefing, Nokia said that devices collected through this program will be shipped back to Hungry. When asked about the establishment of a recycling unit in Pakistan, Nokia explained that transporting it outside Pakistan is less costly than actually maintaining the plant here.

Following are other highlights of Nokia’s Briefing: