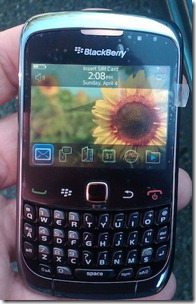 For all Blackberry enthusiasts who were waiting for the Blackberry Torch to appear in Pakistan, considering its high price and some browser issues; unfortunately looks like it will not be appearing in Pakistan officially. However, if you have the money, you can buy it off the market.

But for those, like me, who use a Blackberry device and are looking for an affordable upgrade, a new Blackberry handset will be appearing officially in Pakistan in the next two to three months.

This handset is a successor to the ever-reliable and affordable Curve 8500 series, and the last variant of Curve to hit our market was the Blackberry Gemini 8520, available in the market and with cellular operators for about 22,000/- to 25.000/- PKR.

As is the norm with all new Blackberry handsets, the Kepler will feature a trackpad instead of the traditional trackball (which used to get dirty and had a lot of issues).

The basic layout for the handset is the same as the Gemini, and fits snugly in the hand. Some cosmetic differences will be the chrome lining on the edge of the handsets and a better keypad.

Another upgrade is the Wi-Fi option, which is really useful considering almost everyone is using wireless internet at home, and it is also available at cafes, airports as well as other landmarks.

The operating system in use will be the latest 5.0 upgradeable (hopefully we will get it with the latest OS). Another upgrade will be the onboard RAM which will be 256 MB, instead of 128 MB. All other features such as layout, buttons, standard multimedia options and shortcut keys will be same with the screen size being 320 x 240 pixels (TFT 65K colors).

The camera in the handset will be a standard 2.0 MP which may put off camera fans and there won’t be a flash. Battery time will be around 4 – 5 hours during talk time and upto 350 hours to 450 hours during standby (expected).

The Blackberry Kepler is a traditional business handset (boring yet efficient) more suited for professionals, who want an affordable device (not recommended for multimedia and iphone enthusiasts). It is expected to be priced between Gemini (8520) and Javelin (8900), the price is to range between 28,000/- to 32,000/- PKR. In this price range, I say it is a good option, unfortunately no memory card is expected in the package.