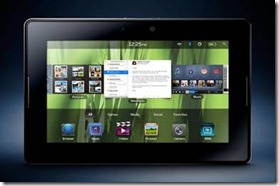 Research in Motion (RIM), the firm behind Blackberry, is taking on Apple in the battle of the pads by bringing on the PlayBook. Samsung has already jumped into this foray with the Galaxy Tab.

The Playbook will run on Blackberry Tablet OS (created by QNX) which will offer full support for OpenGL, POSIX (Portable Operating System Interface [for Unix]) as well as standards such as HTML5. It will also have the ability to handle Flash content with support from Adobe as well as Adobe AIR Apps.

This will be the first time that Blackberry has ventured outside the Mobile phone realm. According to the people associated with its development as well as various analysts, it will be targeting the professional user segment of the market which has been the niche market for Blackberry.

According to RIM CEO Mike Lazaridis, it will be an incredible gaming platform for publishers and players and it will let the users get the full web experience.

It will be the first professional tablet with a 7-inch (17.8 cm) 1024 x 600 capacitive multi-touch display, a Cortex A9 based dual core 1GHz CPU, 1GB of RAM and two cameras, a 3 mp front facing camera and a 5 mp rear camera for video conferencing.

No storage capacity has been mentioned as yet although it is safe to presume that 16GB and 32GB units will be developed. It will be capable of playing 1080p HD content, will be equipped with an HDMI port as well as a microUSB jack, WiFi (802.11a/b/g/n) and BlueTooth 2.1. The device weighs in at a 400 g, is 0.4 inches thick and will measure 5.1 by 7.6 inches.

With regards to the interface, the tablet will offer an amplified view of what is already on your blackberry, as described by Lazaridis. The OS will likely be a mix of Blackberry OS (which will of course help users familiar with operating Blackberrys) and webOS. It will also allow multi-tasking via a card type menu.

Blackberry users will be able to pair their devices with the PlayBook via Bluetooth to view e-mails, use the calendar, as well as share, sync or duplicate data.

RIM has also informed that it will be releasing a software kit to enable third party developers to begin making applications for the PlayBook.

Whether it will be as popular or trend setting as the iPad, only time will tell. The expected release date for the PlayBook is early 2011 and no price has been mentioned.

The specs are as follows: