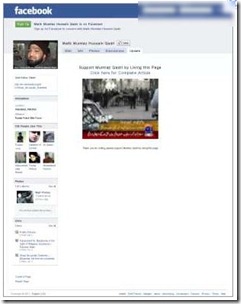 Facebook has removed Mumtaz Qadri’s fanpage from its website, which had managed to attract more than 2,000 fans in less than 24 hours.

Fan-page for Mumtaz Qadri was immediately created by some unknown internet user in Pakistan last night, just hours after the Mumtaz Qadri killed Mr. Salman Taseer in Islamabad, told us a ProPakistani reader who had joined the page last night.

At least 2,000 fans had joined this page, a good number in short span of time for a country like Pakistan.

There are reports that Facebook has deleted at least one dozen pages that were praising Malik Mumtaz Qadri, who has reportedly killed Mr. Salman Taseer in response to his statement against blasphemy law.

Facebook Users are still creating fan-pages for Mumtaz Qadri, but with relatively lower follower-ship. They are likely to get deleted by Facebook soon.

It merits mentioning here that Facebook removes a fan-page from its website if it is reported by sufficient number of users.

However, this doesn’t happen all the time, as Facebook had decided not to remove a page that was spreading hatred against Prophet Mohammad (P.B.U.H) and Muslims at large, in response to which Pakistan had to ban Facebook for two weeks in May 2010.

Waqar Shahmshad has sent us following screenshot, whose page was banned by Facebook over TOS voilation: 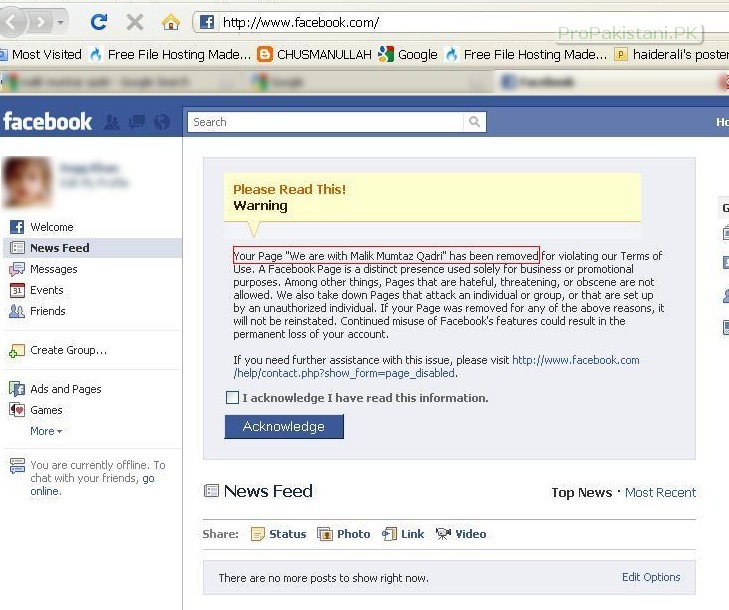