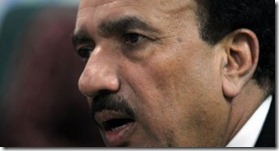 He has said that text messages will be monitored as well to make sure that no anti-Islamic text message is exchanged between mobile subscribers.

There are reports that interior ministry has been told to file cases against Pakistan-based persons who are part of anti-Islamic agenda. Minister said that a committee has been set up with representation from the Pakistan Telecommunications Authority, Federal Investigation Agency and Interior Ministry to monitor anti-Islam propaganda on internet and SMSs.

Mr. Rehman has appealed to the youth to report websites posting material against Islam and Pakistan.

A senior journalist while speaking with ProPakistani that minister’s orders are insignificant and useless. He said that there is already a committee and procedures in place at Ministry of IT that watches and decides on blockage of all the websites with anti-Islamic content.

He said that already available committee at IT Ministry is the one which had blocked thousands of blasphemous websites in May 2010. He opined that MoIT has the proper mandate to watch the cyber space.

It merits mentioning here that anyone can report anti-Islamic website at [email protected] or 0800-55055.

Mr. Malik’s recent most  order came after reports of anti-Islam content being published and spread via internet and SMSs in the wake of the assassination of Punjab Governor Salman Taseer.

It merits mentioning here that Mr. Malik has issued similar orders in the past regarding the SMSs, which were never materialized, either because of incompetency or otherwise due to no policy framework.