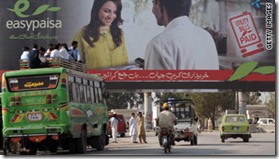 Telenor Pakistan with its product Easypaisa has entered the race of the Global Mobile Awards 2011 for the first time to record a landmark milestone achievement in its history.

The Norwegian cellular operator seems confident in contesting for two following categories (out of 9 total categories).

The two categories listed above have five sub-titles including:

The GSM Association’s Global Mobile Awards 2011 ceremony would be held on February 15 in Barcelona, Spain to announce the name of the winning cellular phone operators of this year.

GSMA award ceremony will be the part of the Mobile World Congress, which will be held 14-17 February.

The GSM Association Awards is considered as the most prestigious contest and mostly called as Oscar for the mobile phone and telecommunication industry.

The Easypaisa services transacted Rs. 10 billion in a single year with the total transaction carried recorded six million mark till October 2010. Starting with 2,200 outlets at the launch, service has been extended to more than 11,000 outlets in 700 urban and rural areas across Pakistan. The spread is even greater than the number of bank branches in Pakistan, which is 8,000.

Pakistan Telecommunication Authority (PTA) is also contesting in the Global Mobile Awards 2011 for the the category of Outstanding Achievement Awards including Best GSMA Chairman’s Award and Government Leadership Award.