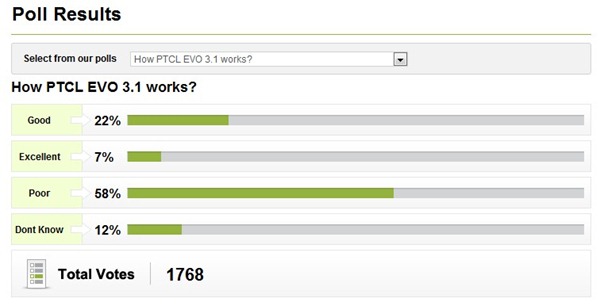 PTCL’s EVO service, which has recently won ‘Best Consumer Choice Award’ is rated as poor by 58 percent respondents (who are supposedly EVO customers as well) in a poll conducted by PTCL itself.

In a poll, available on PTCL’s website, a total of 1768 EVO customers have voted so far, out of which 58 percent think that EVO service is poor. Another 22 percent believe that service is Good while only 7 percent rated EVO service as Excellent.

12 percent respondents opted not to rate the service.

Poll is open as of now and is availably publicly here: http://www.ptcl.com.pk/poll_result.php?poll_id=8

EVO is a wireless broadband service from PTCL, which promises the mobility at 3.1 Mbps internet in over 100 cities. Consumers are usually not satisfied with the EVO’s signals in various part of major cities, resulting disconnections or low than advertised speed.

Despite this feedback, EVO’s recent ‘Best Consumer Choice Award’ poses a question mark for the authorities concerned and the credibility of all the awards that we see around us.

Thanks to Asadullah Ahmad for digging this for us.