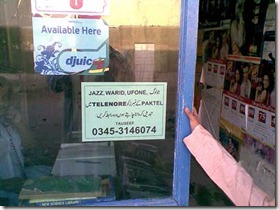 It is quite hard for the 100 million plus cellular subscribers in Pakistan to not know what Mobile Number Portability (MNP) is. But for those who don’t, watch some cable television and be enlightened by the cellular operators across the border.

India, in 2010, finally pushed through the MNP feature among their 500 plus million cellular subscribers, energizing the competition in the market. Each operator in the country has spent the last quarter incorporating the technical and marketing strategies needed to deal with the porting of numbers among the industry players.

Portability of numbers has always brought about a high degree of relevance to the retention of customers, as changing your contact details remained the largest hindrance to a customer moving from an unsatisfied operator.

For the Pakistan industry, MNP was introduced in 2007 with great fanfare and at a significant cost to the cellular operators, with estimates from industry insiders pointing to the $100 million mark.

And while we all applauded this step, the failure to follow-up with standardized and reliant processes meant a nightmare experience for many who decided to make a transition to greener pastures.

There are countless stories of consumers being pinged and ponged between the offices of their current operator and the prospective one, as the information of the steps to port only trickled down to the frontline forces of the cellular operators.

More recently, the porting process has become a laborious and delayed task, where a consumer could end up without any services while the operators sort out when and how they wish to complete the requested process.

In fact, a 15-day delay is often the stated norm by service centers for all operators when approached with a number porting request, displaying a lack of empathy for the consumer. What beggars understanding is how the operators concluded a 4 day maximum timeline for the porting process, when establishing the Pakistan Mobile Number Database (Guarantee) Limited, also known as PMD.

It is often judged as unfair to compare the local results against international practices, but the telecommunication industry is a globalized sector that feeds off implementations in various environments across the world. So, with Ireland having a 2-hour porting process timeline and France having 30-day, Pakistani operators went from the top end of the scale to the median, for the best case scenarios.

Then there is the usage of ported numbers which leaves an odd taste for every user. Call someone who has had their number migrated and you are greeted with this loud shrill. The operators feel that the best way to let their users know that their friend has moved off the network is by giving your eardrum the worst wake-up call ever. Why not have the friend hear the shrill each time they call their former network, or maybe a hissing sound for betrayal or a wailing tone for the sadness of loss of revenue.

On the numbers front, the PMD has made no updates to reveal the effect for each cellular operator. While Telenor was proud to announce its 1 millionth MNP customer around March 2010, there was no statement on how many left it for one of the other 4 service providers.

The only data which ends up being reported is the Net Additions made by the operator, which is a sum of many variables. Also, operators are not comfortable openly projecting the number of users leaving their network, and would normally place port-outs in the Churn category of their reports, which includes dormant subscribers and those that do not fulfill certain qualifying criteria to be a part of the overall subscriber base.

However, analysts estimate over 3 million consumers to have availed the MNP facility in Pakistan since its introduction.

While the largest operator is commonly thought to be the one at the losing end of MNP, this has not appeared to be the case in the local market, where Mobilink has retained its top spot. However, there has been jostling among all in terms of services and prices, allowing the consumers to reap some reward. But operators still remain the king makers, applying every tactic to delay and avoid processing port-out requests, as subscriber numbers is the top metric for the industry.

To describe fair play on the MNP stage, there are examples from the developed world, where consumers can negotiate certain benefits like free minutes or SMS or discounts on monthly fees, once they are eligible to port-out from their contracts with current operators. This allows for consumers to seek further value for their money. Unfortunately, that level of understanding is not held by the local consumer yet, and the operators continue to remain the directors of the industry and its evolution.

MNP was supposed to bring a focus on more than just price; it was supposed to introduce a new avenue of competition in quality of service. However, with a regulator driven by fees instead of public sentiment, this feature appears to have failed in creating a level platform of competition for the local market.