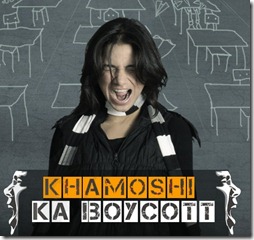 Telenor Pakistan has revamped its youth brand djuice, with an approach of involving youth to speak up against bad things in our society.

Djuice, which was previously known for rocking the youth is going to change the look and feel of the brand by bringing in fun to the lives with a meaning, with a purpose to change those little things around us which ultimately turn heavy for the society.

Djuice says It’s about coming together to make things happen for the positive, for you, for the youth. And having absolute fun, masti, maza’a, pleasure, thrill, excitement (whatever you wanna call it) – while doing all the right things!

For the purpose, djuice held an event in PC Karachi today, where the youth discussed things that can change our future. Various other issues such as “Booti Culture” and “Poondi” were discussed too, though not all of them knew what exactly the “Poondi” is.

Event was hosted by Nadeem Chohan, who did well with his job.

Djuice has revamped its website already to blow a new look. Website is pretty catchy, however, very badly structured in terms of styling and object/image sizes.

By the way, there’s no tariff change or a new plan introduced by djuice with this re-branding – probably a disappointment for the youth.

Following is the official PR on this:

KARACHI, February 19, 2011: Telenor Pakistan has announced its new philosophy towards its youth brand ‘djuice’ to reaffirm its commitment to the young people of Pakistan. The company announced the brand’s new philosophy through an unveiling event in Karachi today. Shahzad Roy represented djuice as Brand Ambassador. The event was attended by university students and representatives of the Youth Parliament.

The new philosophy, which empowers young people to speak out and take action against social injustices, comes with the tagline ‘Khamoshi ka Boycott’. The event comprised the unveiling of the new identity of the brand and a discussion among the audience on speaking out about the social problems they see in their everyday lives.

Speaking on the occasion Chief Marketing Officer Telenor Pakistan Aamir Ibrahim said: “More than half of Pakistan’s population consists of youth, who are talented, intelligent and aware of their surroundings. Now all the youth need is direction, a means to speak out and raise their voice against social injustices. Through djuice’s ‘Khamoshi Ka Boycott’, we aim to do just that.”

Shahzad Roy and Mahira Khan have been named as djuice Brand Ambassadors.

Speaking about his association with djuice, Shahzad Roy said: “Silence against wrong only increases frustration among nations. As the country’s youth, we are responsible for pointing out the wrongs that are prevalent in our society. We must realize that we cannot remain silent. We must speak up. I have done this through my music and my efforts towards education in the country. Now I want this to be taken up by all of you. Djuice can become a means for you to speak out.”

In a video message to the event’s audience, Mahira said: “What excites me about the project is that it’s a pro-social campaign. I like the people I am working with and they have assured me that it’s not just a commercial it’s going to be much more than this. Which is why I want to be a part of it. I like Khamoshi Ka Boycott. It’s something we need to do.”

Djuice is the world’s largest youth Mobile brand and is spread across six countries. In Pakistan it was launched in 2006. Being the premier youth mobile brand in Pakistan, it is the choice of millions of young people across the country.