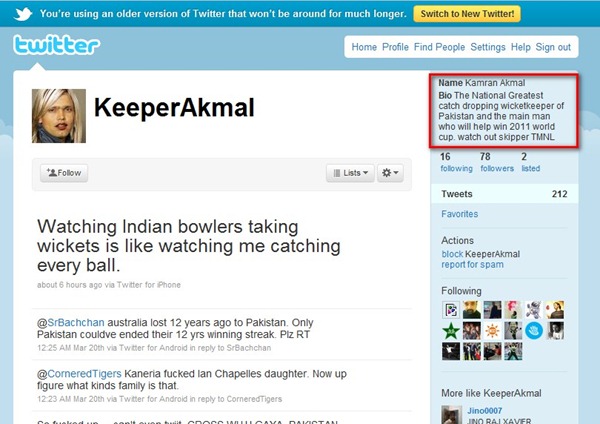 “Going viral” is a term I usually associate with the latest internet memes (LOLcats for instance) and funny videos. But as of late, I’ve seen this trend, of seemingly instant gain in popularity, here in Pakistan too.

Whether it’s “Faraz” poetry in text messages, or “Zubaida Aapa ke totkay”, there’s always someone being made a punch line of jokes and text forwards these days.

With the World Cup hype at an all time high, Kamran Akmal’s dropped catches of Ross Taylor (whose innings of and unbeaten 131 cost Pakistan the match) have made him a comic character, jokes on him providing chuckles to millions.

The Internet and mobile phones throughout the country are absolutely buzzing with jokes about his keeping. People vented their frustration at Pakistan’s’ defeat by going after Kamran Akmal all guns blazing on Facebook and Twitter.

So much was the volume of tweets about him that “Kamran Akmal” was actually in the worldwide trendy topics on Twitter after the match. 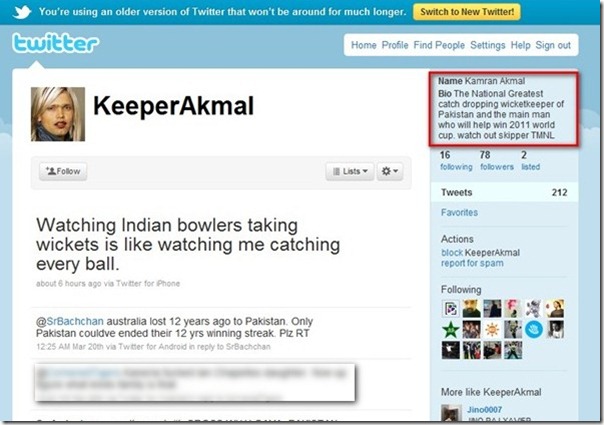 And while we’re on the subject of Akmal humor here’s what the masses had to say about him:

Why did Kamran Akmal WALK back to hotel???? Because he failed to CATCH the bus :p – Ozzy Ali on Twitter

Some of the readers among you who aren’t that cricket savvy might be wondering why so much fuss on a couple of dropped catches. A Pakistani cricket enthusiast collected all the stats and here’s the rundown. He’s dropped 62 catches since 2006. A complete list available here:

He has also been in talks with the International Cricket Council on his poor keeping, deemed by many to be suspicious.

The most famous loss that Pakistan suffered because of Kamran Akmal’s iron gloves came against Australia in the second test at Sydney cricket ground where he dropped three Mike Hussey catches who then went on to make an unbeaten 134. Irony came knocking when Mike Hussey was named as man of the match for his unbeaten 134 which gave the Aussies a narrow 36 runs win.

Why Becoming an Hero is so Quick?

All jokes aside, this instant notoriety is relatively new and is something not seen even 5 years back. I guess the thing is that we are more connected than ever before. All it takes is one message and it will spread like wildfire since a good forward joke is always welcome amongst us.

Another thing is that internet has become an integral part of our lifestyles now. DSL subscriptions are rising all the time and mobile internet use is through the roofs too. If anything interesting happens, the first thought across a majority of the people would be “I should update my status!” or “I should tweet about this”.

With the changing trends, people don’t wait for TV or newspapers to uncover a story or a development. This is a double edged sword though, in my opinion. On one hand, this connectivity can instantly rouse people to protest against the latest price hike. Or, it can be used to drag the image of a poor soul, think Zubaida Aapa, through the mud.

When it’s used for the latter, the problems begin. In the specific case of our first choice wicket keeper, people played the judge and jury and sentenced him to slander and ridicule. Whether or not it should have been done is an entirely separate matter.

As I’m writing this, I can see some of you squirming in your chairs, itching to lambast me for writing in his defense and to say that he deserved it. I address that by firstly saying that I am in no way defending him, I’m just saying that there is always a more civilized way to go about things.

I was particularly angered at a forward I received containing Kamran Akmals’ home address. That is simply unacceptable. Who knows how things might have panned out if some hot-heads actually went there?

I guess the thing is we’re an emotional nation. And sometimes, containing those emotions can be a bit of work. But sometimes a cooler head is required. Jokes and fun are good things, but hurting other people to get a laugh is in no way acceptable.