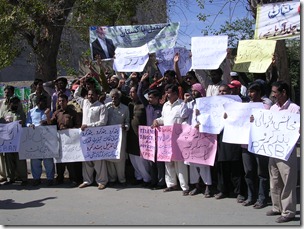 People of Multan are on the roll. Being always the first in any kind of resistance, NGOs and public in Multan staged a protest in front of Multan Press Club against Telenor’s “Khamoshi ka Boycott” TVCs.

The protest, on Sunday, was called by various NGO’s including Naveed Sehar Foundation, Save Future of the Child Organization, Young Pakistanis Organization, Rabita Pakistan Pasiban.

Senior officials of above mentioned NGO’s said that Telenor’s TVCs are not only spreading despair amongst Pakistanis but they are also negatively showing the culture of Pakistan which is hampering the image of the country.

They said that Telenor is presenting Pakistan’s culture in worst possible manner just for the sake of their marketing and subscriber count.

They said that gender discrimination and harassment is a global phenomenon. “While the ratio of sexual harassment incidents in Pakistan is way lower than other countries, Telenor is misrepresenting the facts just to spoil Pakistan’s image”, said a protestor.

“Telenor is trying to portray that due to gender discrimination, people don’t allow their sisters, daughters to work or to get education, which is not the case in real”, he added.

Protestors demanded Telenor to immediately stop airing these TVCs or these protests will be taken to next level.

Telenor Pakistan is airing a series of TVCs in which they are asking for the public opinion about various issues including: