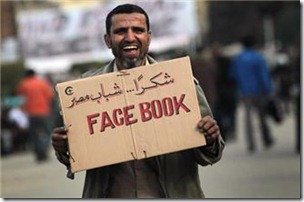 After the successful social media led political revolution in Tunisia called “Jasmine Revolution” and later in Egypt which led to the overthrow of decade long dictator ships in these countries, many people have predicted that Pakistan can also become the center of such revolution.

People in support of such revolution argue that Pakistan too has enough population using social media (internet and mobile phones), that they certainly can trigger a change in the ruling elite class replacing it with a government truly democratic in its policies.

Yes, indeed Pakistan has a good chunk of its population using social media but what are their activities on internet should also need to be examined. It will not be wrong to say that most of our internet traffic is non-serious i.e. they only use net as means of chat, watching videos, music etc., and seldom or never participate in any positive activity.

So is the case of Mobile phone users. A vast majority of them is interested in only funny SMS and games.

There may be various reasons of this non-serious attitude. Primarily it is lack of education and lack of self understanding as a nation i.e. where we stand today and where we should be. Unless we don’t have well educated people in our lower middle class there is hardly any possibility of change for the better, at any platform.

This is just one side of the story. Those who believe that such social media revolution can’t be brought in Pakistan stress that Pakistan already has a democratic elected government and people are enjoying free media and every one can express his/her view point openly.

So why would people go for such revolution when their needs are met and there is no oppression on them.

Both sides arguments are valid as either side have solid arguments of proof but middle grounds remain and the debate of any such social media led political revolution are not gone forever in Pakistan. In fact they are becoming even stronger every day as our youth is reaching the point of maturity and self understanding.

Pakistan may have a democratic government but massive corruption and lawlessness make situation ripe for a revolt against the prevailing system of blessing some at the cost of many.

Regarding the wider debate of chances of any social media led political revolution in Pakistan, it will be unfair to expect it any time sooner.

Though we have seen online activism (during Chief Justice campaign) in the past, however, organizing the human power still remains a dilemma for online community of the country.

Unless and until people of Pakistan don’t unite on some basic principles and common grounds shedding their minor differences there is little chance of any such revolution in the country.