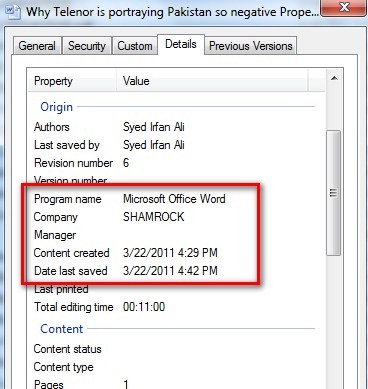 In October, last year, we started this section called “Letters to Editor”. Then, primarily the aim was to give due coverage to our readers’ individual level complaints, queries which we couldn’t entertain in our usual transmission.

However, from today, we won’t accept any letter based on a very unfortunate incident that happened this week. Following is the complete tale.

If you are following ProPakistani, then you may know that we had a stance against Telenor’s “Khamoshi ka Boycott”, which is still there. For raising our concerns, we did multiple posts on the said topic, two of which were under “Letters to Editor”.

In connection to this ongoing series of posts on “Khamoshi ka Boycott”, exactly after one month of our first post on topic, on March 22nd we received an email from a person named ‘Nabil Anjum’. We believe this email was sent to multiple bloggers with an article titled “Why Telenor is portraying Pakistan so negative?”.

This was actually a lifted article that was already published on ApnaTime. 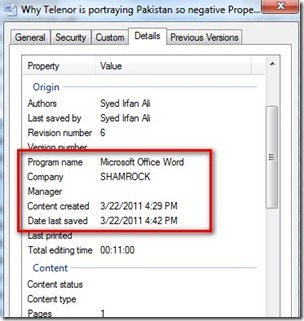 Sender requested us to publish this article, however, we ignored it altogether as it was an ‘already published content’.

Later in the evening, Jameel Arif published the same article (that was sent to us as well) on his blog with a shocking revelation that document attached in the email was owned by Shamorck, the PR agency of Mobilink.

We have checked our email too, and we can confirm that Jameel Arif’s claim of Shamrock’s ownership of attached document is valid.

For the purpose, we contacted Shamrock, and asked if they are purposefully spreading this article about Telenor? to which they disowned this email, article and everything. They denied Shamrock’s involvement with this incident at any level, and explained that changing the properties of a word file isn’t a rocket science.

Mobilink told us that they condemn whatever has happened and company isn’t involved in it, directly or in-directly. Mobilink said that they are investigating the issue with their agency.

So who sent us this email then?

Case 1: Shamrock sent this email to various bloggers to get the article published. But as they are denying it – and we don’t have enough proofs so its just a theory.

Case 2: Another theory is that competition companies, maybe Ufone, Zong or Warid emailed the bloggers with this article attached. And they changed the properties and the ownership of word file.

Case 3: Telenor sent this article to bloggers (while changing the ownership of document) to get a breakthrough and block the criticism they are receiving for their campaign “Khamoshi ka Boycott”.

In our opinion, keeping the interest in the mind, there can’t be the forth case. We strongly believe that no blogger, reader, PTA, trader, vendor, common person can do this except the up-mentioned 3 cases.

In any of the above mentioned 3 cases, the person / organization responsible for this act is trying to defame competition, which is highly condemnable.

At ProPakistani, we protest against this act, which has hampered PR, Blogging and Telecom community. As an action against it, we are pulling back our Letter to Editor section, which could be used for such illicit work.

Through sources, we have heard that Telenor and Mobilink management is meeting today, or tomorrow at most to discuss the matter. However, neither Telenor nor Mobilink has confirmed us anything on this meeting.

We are confident that we will be able to determine the original sender of this email in coming days. As always, we will keep you posted with whatever information we will get on this.

On a side note, did you notice that Telenor didn’t advertise “Khamoshi ka Boycott” during yesterday’s Pakistan Vs West Indies quarter finals?