In the past, we have heartedly bashed Geo TV, for the reasons we thought were right. But you will have to believe me that Indian Media has turned out to be the best (obviously lot better than Geo) at falsifying the facts and bending them for their own good.

Preparing the nation for today’s Semi Final between India and Pakistan, India media has left no stone unturned to belittle Pakistani team, and for this they are bluntly altering the facts to add spice to their shows. 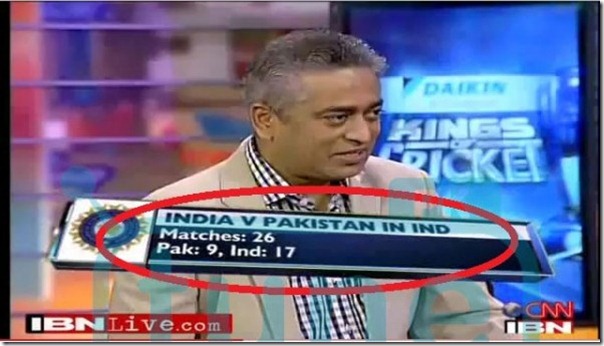 According this show, Pakistan has played a total of 26 matched in India against India, out of which India won 17 matches and Pakistan managed to win 9 matches. Well, this is not true.

This is one example of Jugglery; there are dozens of other incidents where India Media is playing with the facts.

Have a look at following video, and note the commentary, does it make any sense to you? Does this channel deserve its existence on the planet? I doubt it.