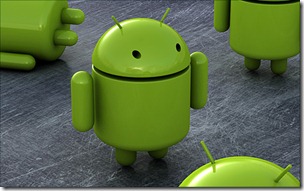 Long gone are the times when it would be 3 to 6 months before a new mobile handset was given birth to the consumer market by its manufacturers. The cellular industry was growing, but at a snail pace compared to the madness of the present age.

Due to the high cost of service, handset manufacturers had fewer factors to appease in order to ensure sales to remain steady.

But with the rapid evolution of the information age, mobile handsets have become the hottest item on the wish list, with launch dates and events. Week after week, a manufacturer begins sales of the latest model, or announces the plans of a new prototype device. The iPhone’s cult following, with people lining up for the launch, has taken the simple communication device to a new standing. And it is still hard for many to explain the need to stand all those hours for a mobile device.

The smartphone arena has become the latest and hottest battleground for all device manufacturers. With more knowledge-able consumers gracing the market, the demand for devices that do it all has resulted in the numerous variants being produced to please every type of customer.

Apart from the hardware, the fight has come down to the software that powers the handset. Ease of use, interaction, applications, connectivity; all form key factors considered by the customer before making a decision.

Nokia has for long remained the numero uno in handset manufacturing, but it was Research In Motion’s (RIM) Blackberry line that brought smartness to the phone, supplying mobility to your work resources. Then came a new century and Apple revolutionized the touch factor for mobile phones.

The madness that has ensued since has created manufacturing big-wigs out of Asian companies like HTC and Samsung. The benchmark set by the iPhone is consistently probed by other creators, in an effort to match and surpass the functionalities and market-draw held by the device.

A recent report by Gartner showed that Symbian (Nokia’s proprietary OS) retained its majority on phone sales in 2010. That majority has been decreasing over time, with the research firm predicting that 2011 will see the top spot going to Android. However, the key factor that has already given fire to debate in the international circle is Microsoft taking second-spot by 2015, ahead of Apple, and Symbian dying out.

One of the assumptions which may have led Gartner’s analysts to come up with these numbers is the link-up between Microsoft and Nokia, with the latter deciding to push the former’s Windows Phone 7 OS on all devices. Windows has developed the OS from scratch, with smartphones in mind, and has won rave reviews for having a good foundation, but needing work to make it a worth competitor. So, with all Nokia devices being Windows-powered, Gartner believes a fifth of the market to be with this dual powerhouse in the next 5 years. 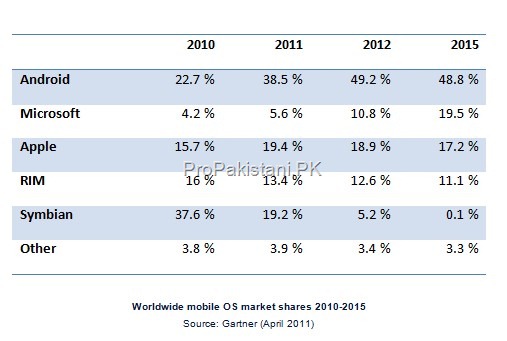 The dominance of Android is hard to negate. Google’s OS has seen its popularity shoot up with each period, and with an open-source approach, most handset manufacturers have adopted it with open arms. With Android powering phones at all price levels and a growing application market with lesser conditions, it has been a relatively easy push for retailers and manufacturers alike to sell their ware to the consumer.

RIM’s continued drop in the ranks is often attributed to its lack of innovation, after being one of the pick of the enterprise crowd. While the company has made attempts in recent years to revamp its portfolio and improve its branding, especially the younger crowd, the delay in realizing the market needs and trends could prove to effect the drop.

While the above numbers provide food for thought, another displays an astounding turn for the communication industry in general; Gartner predicting a 57.7 percent increase in 2011 of smartphone sales to 468 million units.

What does this mean for the Pakistani market? Well, if the recent smartphone launches are anything to go by, the cellular operators are beginning to step up on the device front. The next question is if their networks will also step up?