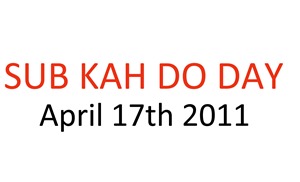 This is a guest post by By Rutaba Ahmed

We have all heard of international observances or days dedicated in support of a cause or to mark an issue of concern or interest and promote awareness, such as Earth Day, World Cancer Day, International Women’s Day, Valentines Day, Friendship Day, World Poetry Day, World Health Day, World Dance Day, World Smile Day and so on.

Friendship Day, for example, which began in the US, is celebrated with great zeal and hype around the occasion, to create awareness about the Day and promote friendship and brotherhood. Although the reasons for establishing this Day are not clear, the retrospection of the world scenario in those days can lead us to an understanding.

With the devastating effects of First World War, such as increased hostilities and hatred between countries, there was a greater need for friendship among individuals and nations. Hence, in 1935 the US Congress dedicated a Day in the honor of friends and friendship, and it became an annual event, which was adopted by several other countries. Friendship Day is celebrated around the world, including Pakistan, with friends exchanging cards, flowers and gifts.

In Pakistan, many such traditions and international observances are adopted and celebrated, such as International Women’s Day, Valentines Day and so on. The Sab Keh Do day, was launched as a unique initiative in Pakistan in April 2009, to celebrate the importance of self-expression and welcome people to say what is on their minds; to express their feelings, views and thoughts freely. By promoting open communication, the Day is a much needed initiative to bridge gaps.

Sab Keh Do is a step in the right direction to encourage communication and increased dialogue between individuals, to promote a positive change in society. Research has shown that poor communication fosters misunderstandings, impaired trust, disagreements, ill feelings and conflict among people. The objective of Sab Keh Do is to create a culture of honesty and respect, and promotes love and peace, by encouraging people to express their feelings openly, clear misunderstandings and build positive communication.

In an increasingly globalized world, with the facilities of modern communication technologies available to us, staying in touch with family and friends in different cities or countries is as simple as making a phone call or sending an SMS.

This year, the Sab Keh Do theme song sung by Rahat Fateh Ali Khan, with its inspiring lyrics and melodious beat, puts a smile on your face every time you listen to it. It truly reflects the spirit of Sab Keh Do and spreads the message of positive communication, friendship, love, honesty and peace.

When The Sab Keh Do was celebrated in 2009 and 2010, various activities were held, including painting and essay writing competitions in more than 100 schools across Karachi, Lahore and Islamabad. These paintings and essays were also included in the Sab Keh Do carnivals held during the month. The Sab Keh Do team interacted with students and encouraged them to express themselves through paintings and essays. This activity promoted talent and creativity in children and but also gave them an avenue for self-expression. There is a need for more such innovative and progressive activities in schools in Pakistan, to foster creativity and healthy competition among children.

Although the Sab Keh Do Day is marked in our calendars as a Day to be celebrated on any weekend of the month of April, it is more than just a Day; it is an inspiring vision which continues to touch the hearts of many, and it is truly the first step towards betterment of society. Sab Keh Do promotes a culture of open communication, honesty and respect and will surely albeit gradually bring about a positive change in the mindset of people, especially the younger generation, who are responsible for the future of our country.