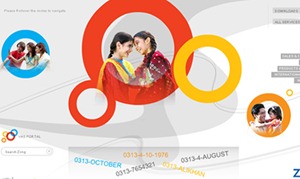 Zong has set unique and popular trends in Pakistan by offering innovative and first-up products and services in the industry. It has boosted the the pace of cellular sector by offering very catchy service rates, free minutes offers, bundle SMS packages and value-added offers.

Since start of its services three years back in Pakistan, Zong has reportedly bagged 9 million customers in commercial, urban, deserted and mountainous cities. (There are un-official reports that Zong has crosses 10 million subscribers’ mark)

The cellular operator is strengthening its position by further expanding its network in nook and corner of the country with handsome foreign direct investment and latest technology.

Following is a roundup of Zong’s popular services:

Zong emerged as a trend-setter with its unique offer of Location Based Charging (LBC) in Pakistan. It started its offer first in Lahore and then in Karachi, Faisalabad, with ultimately covering more than 100 cities.

These LBC packages such as Lahore Unlimited and Karachi Unlimited – went successful and got wide popularity among the subscribers as players like Mobilink and Ufone also followed it and introduced their LBC packages to retain their share in the stiff competitive market.

The operator intensified war in the cellular sector and grabbed its share not only through its normal packages but with MNP too. It has played a key role in the industry to promote MNP service by its advertisement and became successful by acquiring huge number of customers from others’ networks.

Other operators followed the same suit later on and came up free minutes and SMS with supporting advertisement to attract customers of rival networks through MNP facility.

Zong is a pioneer in introducing internet mobile services on daily and hourly subscriptions. This trend was copied as all operators have now designed and offered their daily internet packages.

Previously mobile handsets were being sold by mobile operators but Zong adopted this approach of offering low-end handsets with low cost bundled with free minutes and SMS on yearly basis.

Besides, Zong’s branded Android Ideos were first to hit Pakistan, which were primarily aimed at low-mid end customers.

Zong has emerged as a popular brand with its unique bundle offers. It started daily subscription of its call package and SMS bundle two and half years ago which were later followed by different operators in the industry.

The call rates were different and facilitating for customers, as Zong left no stone unturned to provide packages that a customer actually needs to use in her or his daily life.

The Z20, which was introduced on the occasion of T20 World Cup, was one of its kinds. Similarly, 100 pay 100 offer was proved to be a matchless package offered by any operators so far. This package was widely availed by customers in the limited time period.

It also offered, 12 Anay, 45 paisa per half min, 65 paisas per half min, Family Package and etc. and remained unbeaten in cellular sector on its unique call rates offer.

Zong presented special number offers for new customers keeping in mind their choice and desire of exclusivity. Subscriber got numbers on their Names, Important Dates Shorts Phrases and Zodiac Sign.

M9, a brand of Zong was introduced in December 2010. It offers most unique package plan for the customers with the liberty to have their choice for number.

The idea to attract huge customers through numbers is a tremendous technique that Zong has really focused on. It fast introduced special number offer, then MNP and by M9, where customers got their lucky number with the advice of numerologist.