Pakistan Telecommunication has published its quarterly report for Oct-Dec 2010. Derived from the report, we are presenting here an overview of cellular sector of Pakistan.

Cellular industry of Pakistan has matured into a competitive and progressive market which requires new ventures to be explored by cellular operators and ultimately delivered to end users.

As of Today, cellular teledensity has reached 62.5% from just 3.3% in 2004 while almost 92% of the land area and more than 10,000 cities/towns/villages are under the umbrella of by cellular services.

From only 2000 cell sites to 30,417 in just six years, cellular services have reached to every nook and corner of the country. However, there still exist challenges for the regulator and industry alike such as quality of service, heavy taxation, lack of local content on mobile phones and economic slowdown. 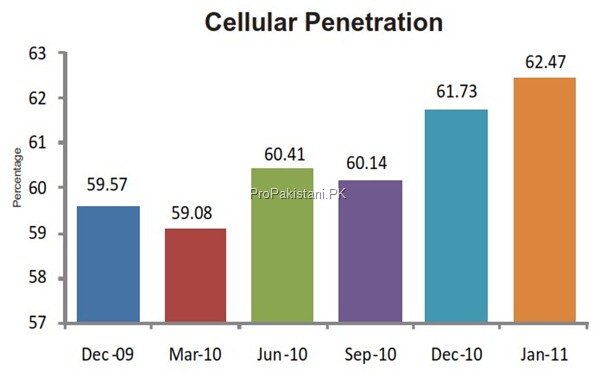 According to statistics made available by telecom operators, there were 104 million cellular subscribers in Pakistan at the end of January, 2011 as compared to 99.2 million at the end of June, 2010 showing a net increase of 4.8 million subscribers over the last seven months.

Almost all of the cellular mobile operators have contributed in this subscriber addition and managed to maintain positive growth trend during the last two quarters. 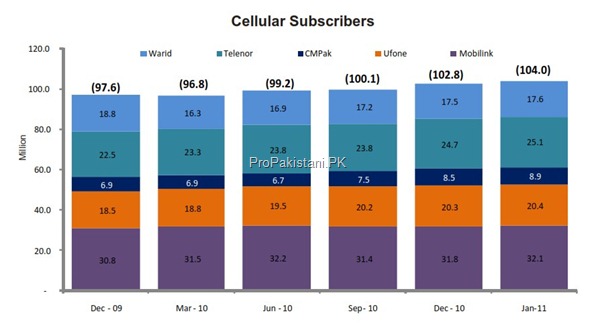 Cellular market is moving towards maturity, stability and intense competition as operators are dedicating their best efforts to achieve a higher stake in the overall market share. Over the last calendar year, cellular market share has not altered significantly.

Quarter-wise analysis of the revenues as shown in figure below reveals that revenues have been on the rise since the start of year 2010, however, there was a dip in the quarter of Jul-Sep 2010 due to huge loss in revenue reported by Mobilink and Telenor.

Mobilink being the SMP has the highest stake in overall revenue of the mobile cellular market. Its revenue during the last four quarters stood highest followed by Telenor. Ufone has steadily grown its revenues sitting at the third spot. Warid lies at the fourth spot while Zong is catching up. 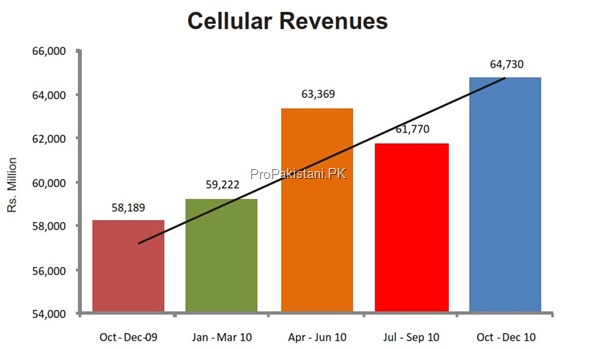 The hallmark of the success of any service pertains to its geographical presence and coverage in a country. In case of Pakistan from hills to plains, east to west, urban to rural, cellular services have reached every nook and corner of the country.

Since major cities and towns have already been covered by the cellular services, therefore, the focus of cellular operators has shifted towards unexplored areas where tough physical conditions take longer than usual to install base towers. 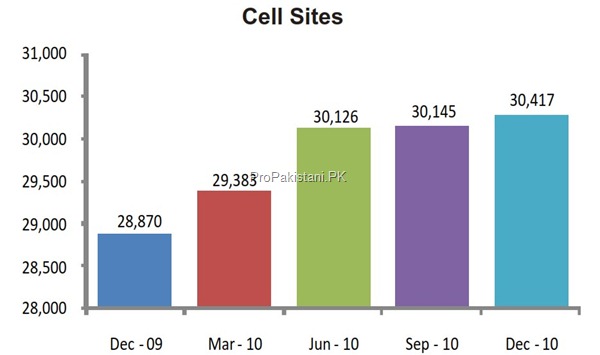 However, if compared with its market share of 31% and no net additions throughout the year, it is probable that focus of the company is more towards increasing its subscriber base rather than expand its existing infrastructure.

Similar is the case with Telenor, Ufone and Warid who lag behind in infrastructure share as compared to their respective market shares.

Zong is the only cellular operator which has a significantly higher infrastructure share rather than its market share. Despite being the smallest operator, Zong has focused more towards raising the network realizing the potential for future growth in the market.

Average Revenue Per User (ARPU) is one of the key indicators to the financial status of telecom market in any country. Pakistan’s cellular companies had to face a tough time by the end of last year due to amplified fixed investments and global recession. However, the cellular industry has bounced back from this temporary shaky period and industry ARPUs are on the rise ever since.

With the upcoming 3G licensing, it is expected that rise in ARPU will sustain for a longer period of time as cellular operators owe to find new revenue streams via data services and Value added services. 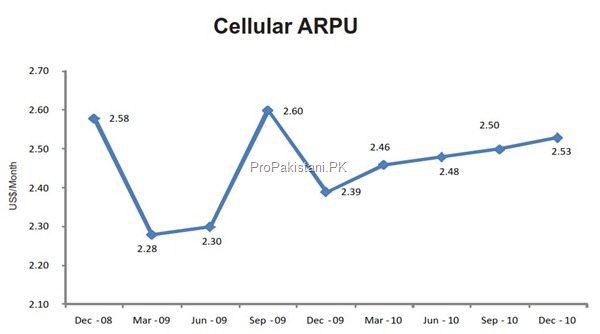 This shows that cellular traffic has increased by 22% thereby establishing the fact that mobile usage is increasingly becoming the preferred medium of communication for inbound and outbound calls to Pakistan.

Total outgoing traffic trend as depicted by figure  reveals the steadily growing trend of making calls from Pakistan to other destinations around the world as 0. 96 billion international outgoing minutes have been recorded during the first two quarters (Jul-Dec 10) of FY 2010-11 as compared to 0.93 billion minutes in the last two quarters of FY 2009-10 (Jan-Jun10).

The increase in traffic is attributed to the low international tariffs and bundled international packages being offered by cellular mobile companies. 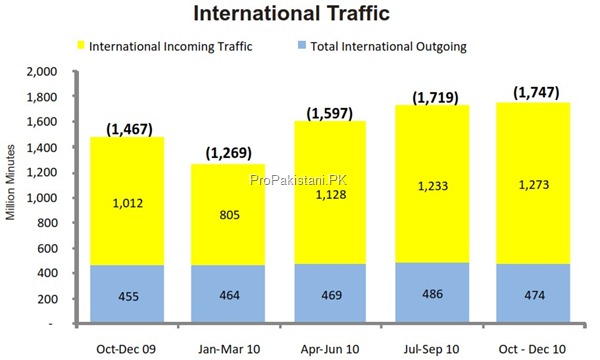 Short Messaging Service (SMS) is one of the important features of cellular mobile services and a vital source of revenue for cellular companies.  Figure below shows a steadily growing trend of SMS over the last five quarters.

All cellular companies generated approximately 100 billion SMS during Jul-Dec 10 as compared to 86 billion during the preceding two quarters. This shows a 16% increase in the SMS traffic in just two quarters.

Ufone leads the SMS traffic parameters by a clear margin followed by Telenor and Mobilink. Warid and Zong have significantly low SMS traffic as compared to their competitors.

This huge rise in the SMS traffic owes largely to the attractive and wide range of bundle packages being offered by all the operators. Daily, weekly, fortnightly, monthly even unlimited packages are being offered at very low rates by cellular companies to cap the true potential of this value added service.