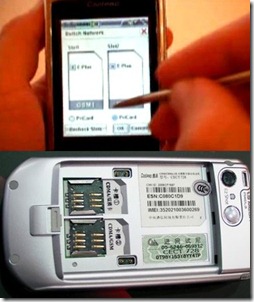 These companies (mainly The Nokia, Samsung and LG) have geared up their brands in the local market – just after few weeks of the government’s announcement of banning imports of all handsets particularly Chinese-made handsets without IMEI numbers.

The phone makers are taking this as an opportunity to revive their share in the local market, which used to be prominent some five years back in Pakistan, and increase their sales of low-cost and dual SIM handsets.

Nokia Pakistan has plans to officially reveal its branded dual SIMs handsets – Nokia X1-01 and Nokia C2-00 – in the Pakistan’s retail markets from the second week of June, 2011.

On other hands, Samsung Pakistan has already introduced an exclusive Dual SIM mobile phone, Samsung Dharak Dharak, (Samsung E2232) in the local markets with its aggressive advertisement and marketing campaigns.

These dual-sim branded handsets were kind of available in limited markets via grey channels but official launches in Pakistan will boost the sale as handsets in bulk quantity will be imported for local shops.

The branded handsets makers now with their massive adverts campaign will cash in on the cautious attitude of buyers and traders avoiding Chinese sets without IMEI numbers sets following the strict statement issued by Interior Minister Rahman Malik.

The branded handsets makers’ advertisement and marketing drive is likely to provide them edge over the current situation.

The market dealers said that 80 percent of the Pakistan market comprises on handsets with cost lower than US $ 100 or Rs 8,500. Therefore the Chinese-made handset have taken over the lion share of the market with their low-cost and facilitative features as against branded sets, which stick to offer different features at comparatively high prices.

However, to tackle this, branded markers are coming up with low-cost handsets having multiple SIM features. The price ranges from Rs. 2,700 to Rs. 5,000 per unit.

Nokia Dual-SIM handsets series prices ranged from Rs 3,100 to Rs 5,500 respectively. On the other hand, Samsung handsets prices start from Rs 2,700 per unit. The prices of the handsets are also likely to see a drop in prices after stiff competition among rival handsets makers.

Dealers from the local market said that Chinese-made sets have captured more than 70 percent of the local market’s share because of its low-cost, dual SIM mode and different entertaining features.

On the other hand, issues with their battery timing and life is not guaranteed as compared to Nokia, Samsung, Sony Ericson, Motorola and LG handsets.

The new handsets range are likely to get attention of the people as the makers offer low-cost sets with multiple entertaining and facilitative features amid long-live guarantee.

The features such as Dual SIM, Bluetooth, Memory card SD, Long battery life, Torch, FM Radio, Video Player, Camera and Stylish and slim are mostly in fashion, which are also attractive for a large number of customers.

“In addition to their various unique features, both of these phones remember the settings for up to five separate SIM cards, each of which can be personalized with a dedicated name as well as preferred SIM settings. ONLY Nokia can offer this level of convenience in Dual SIM phones!”

The Dual handsets trend is growing in Pakistan and in all over the world because of attractive call and SMS tariff offers of multiple cellular operators, said Zeeshan Quershi, Head of Sales Samsung Electronics Pakistan and Afghanistan.

The Dual handsets are likely to increase the share of branded handsets in the local market owing to their high quality and durable live as compared with Chinese-handsets, he added.

Pakistan has topped among the regional countries in 2010 with the highest number of cellular phone subscribers having more than one connection of different operators, Lirneasia study reported recently.

Subscribers’ use multiple SIMs to avail the best offers of the cellular operators in terms of services tariff, network quality and free hours on-net call packages, which is specified for limited numbers normally called as Friend and Family numbers.

Majority of the customers utilize one operator’s services as their prime network whereas they own SIMs of other networks to enjoy tariff of different operators.