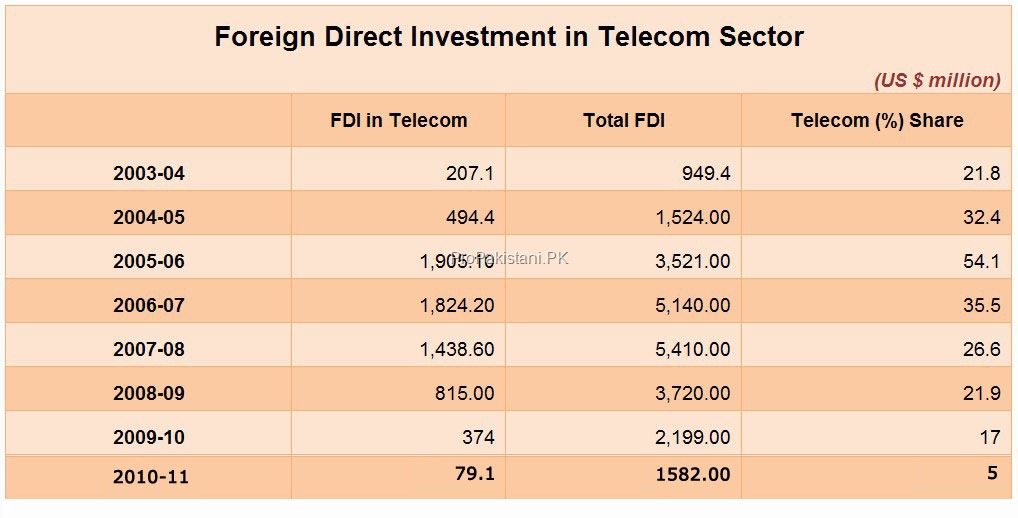 The telecom industry that contributed highest in the Foreign Direct Investment (FDI) among all different industries has failed to continue its spending on infrastructure and technology, as telecom operators are reluctant to invest in the country where their returns are constantly squeezing against their increasing operational expenses. 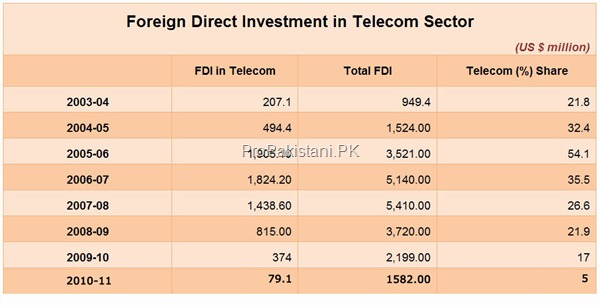 The FDI in the telecom sector has fell by 79 percent in the closing financial year of 2010-11, State Bank of Pakistan (SBP) statistics said.

The overall telecom sector including LDI, cellular, broadband and various class value-added service providers have brought merely US $ 79.1 million FDI in the closing fiscal year 2010-11 as compared with US $ 374 million in the previous fiscal year 2009-10.

The share of telecom sector in overall FDI has contracted to merely 5 percent in the outgoing fiscal year against 17 percent of the share recorded in the last fiscal year.

The FDI level is the lowest since year 2003-04 in the telecom sector as FDI continued to increase till 2009-10. The sector used to be considered highly potential as landing billion dollar investment with host of economic activities.

An Official said that the cellular sector had invested huge money on the telecom infrastructures over the past couple of years, expanding their network more than 90 percent through out the country.

The FDI volume has witnessed significant cut in the outgoing fiscal year however FDI is still landing in the country on up-gradation of network and introduction of value-added services, he added.

The revenues of the cellular operator declined substantially owing to stiff competition, which made investors reluctant to refrain from investing more capital into Pakistan’s land.

They further said the telecom operators have curtailed to send revenues to their headquarter countries whatever they earned in Pakistan and re-investing their earnings on their operations and businesses.