Anonymous has announced its new target, operation facebook. In a YouTube video (showed at the end of the post), the hackivist group said that their new aim is to ‘kill facebook’ on 5th of November, 2011.

The group said that keeping in view the privacy issues on Facebook; they have decided to completely destroy Facebook on 5th of November which is called Guy Fawkes Day.

Just in case if you haven’t heard of anonymous before, here’s their Wikipedia link.

It merits mentioning here that Anonymous had started its own social networking platform called AnonPlus which is “a new social network where there is no fear…of censorship…of blackout…nor of holding back.”

Though the network is hacked by Syrian hackers (still in their control) in response to the defacement of Syrian Ministry of Defense’s website by Anonymous.

Below is the statement issued by Anonymous to launch operation Facebook:

Attention citizens of the world,

We wish to get your attention, hoping you heed the warnings as follows:
Your medium of communication you all so dearly adore will be destroyed. If you are a willing hacktivist or a guy who just wants to protect the freedom of information then join the cause and kill facebook for the sake of your own privacy.

Facebook has been selling information to government agencies and giving clandestine access to information security firms so that they can spy on people from all around the world. Some of these so-called whitehat infosec firms are working for authoritarian governments, such as those of Egypt and Syria.

You cannot hide from the reality in which you, the people of the internet, live in. Facebook is the opposite of the Antisec cause. You are not safe from them nor from any government. One day you will look back on this and realise what we have done here is right, you will thank the rulers of the internet, we are not harming you but saving you.

The riots are underway. It is not a battle over the future of privacy and publicity. It is a battle for choice and informed consent. It’s unfolding because people are being raped, tickled, molested, and confused into doing things where they don’t understand the consequences. Facebook keeps saying that it gives users choices, but that is completely false. It gives users the illusion of and hides the details away from them “for their own good” while they then make millions off of you. When a service is “free,” it really means they’re making money off of you and your information.

Think for a while and prepare for a day that will go down in history. November 5 2011, #opfacebook . Engaged.

While on the other hand, following tweets from Anon Group depict totally different point of view, claiming that this is just false hype and Anonymous has no such plans. Even if there are some individuals, they do not represent the whole anonymous. 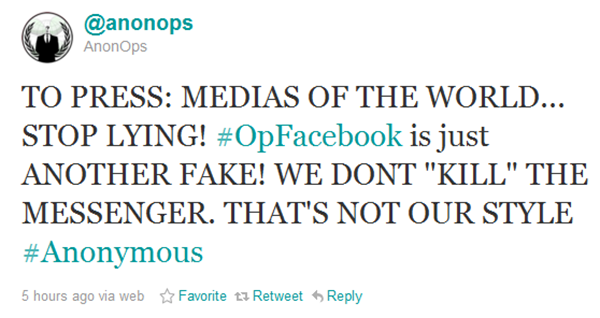