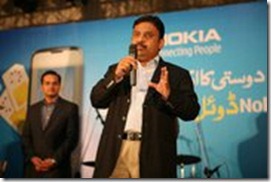 Arif Shafique has been appointed as Country Manager for Nokia Pakistan and Afghanistan region. He will be replacing Khalid Alvi, official sources told ProPakistani.

The official announcement has not been made yet, however it is expected that company will announce name of Arif Shafique as top official of the country in next few days.

Mr. Khalid Alvi was appointed as country manager in June this year after Imran Khalid Mehmood was promoted as regional head. He has quit Nokia few weeks ago to join F&N Beverages Malaysia as Managing Director.

Mr. Shafique, on the other hand, has been playing a key role in the organization mainly for increasing the sales of handsets with different available channels after he was promoted as Head of Sales in 2010. Mr. Shafique has been working for Nokia for past four years.

He has been successfully achieving sales target of Nokia in Pakistan and Afghanistan with different achievement under his belt including device and solution selling, deployment of countrywide sales team, retailing and wholesaling.

Mr. Shafique has also previously served Nokia as Account Manger for Distributor Partners of Nokia in Pakistan & Afghanistan. The responsibilities entailed generating the  sell-in to distributing partners and ensuring the sell-through in trade channel.