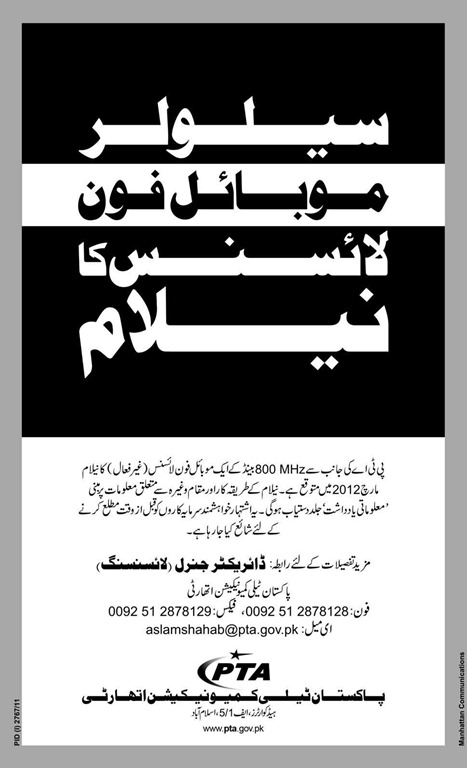 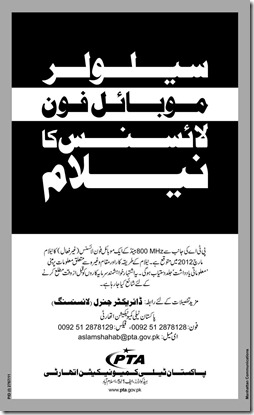 Pakistan Telecommunication Authority has announced that it is likely to auction a 800 Mhz cellular license for Pakistan in March 2012.

Without revealing the modalities and procedures for the said auction, PTA said that this announcement is to alert the interested investor before time.

Announcement came after Yousaf Raza Gillani, Prime Minister of Pakistan, approved the auction of a cellular license freed by InstaPhone, during a cabinet meeting last month.

It was decided in meeting that new international players as well as existing operators would also be invited for Instaphpne license auction being the sixth of the existing licensee in the country and not a new licensee.

This auction, if goes successful, is believed to bring USD 291 million as inflows for government of Pakistan.

Pakistan Telecommunication Authority had earlier terminated InstaPhone’s license in October 2008 for not paying the license renewal fee and other charges valuing more than Rs. 7.9 billion. InstaPhone had moved to IHC and then supreme court against PTA’s determination to get a stay order on it.

However Both the appeals were dismissed by the court and PTA’s determination was upheld. However, the court extended the date for making the outstanding payment by InstaPhone to 6 May 2009. InstaPhone license was eventually scrapped when company failed to make the due payment.