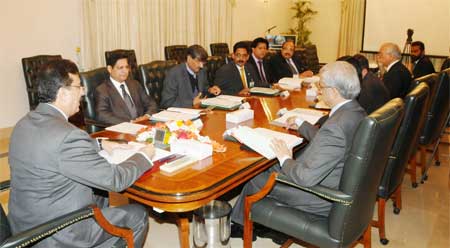 Prime Minister also laid emphasis on initiation of more developmental projects, especially in Balochistan using technologies like optic fiber, microwave, satellite and telecom excellence centers. Prime Minister also directed to conduct training for people living in un-served areas so that direct and indirect employment opportunities can be created for them and digital divide can be bridged. He urged the Fund to enhance equitable services to all segments of the society and also ensure that funds are used economically as well as prudently.

The meeting was informed that the rural telecom project in Mastung Lot, basic telephony and data services will be provided to a population of 74,831 people which reside in 102 muzas. Mastung Lot consists of Mastung, Nushki and Ziarat districts. In the broadband project of Southern Telecom Region-V, the broadband services would be provided in 73 towns and cities in 10 districts namely Ghotki, Jacobabad, Kambar Shahdadkot, Kashmore, Khairpur, Larkana, Naushahro feroze, Shaheed Benazir Abad (Nawabshah), Shikarpur and Sukkur. The project aims at provision of 78,000 broadband connections in these districts. It was informed that in addition to this, 206 Educational Broadband Centers (EBCs) would be established in higher-secondary schools and colleges and 93 Community Broadband Centres (CBCs) for those who cannot afford to have their own personal computers.

The board noted that USF had made immense progress under the rural telecom programme as USF has provided basic telephony and data services in more than 3,500 muzas. Broadband services have been provided in 256 2nd and 3td tier cities and towns along with providing almost 334,000 broadband connections and establishing 943 EBCs and 291 CBCs. In the optic fiber programme, around 3,960 kms of optic fiber cable has been laid to connect 58 un-served tehsils and towns. To take broadband internet to the villages, USF has launched another Programme. The pilot project of that programme is also under implementation aiming to bring the most modern e-Services through broadband, down to the village level. With these achievements, USF has created a success story for the public-private partnership entities nationally and internationally, the meeting was told.