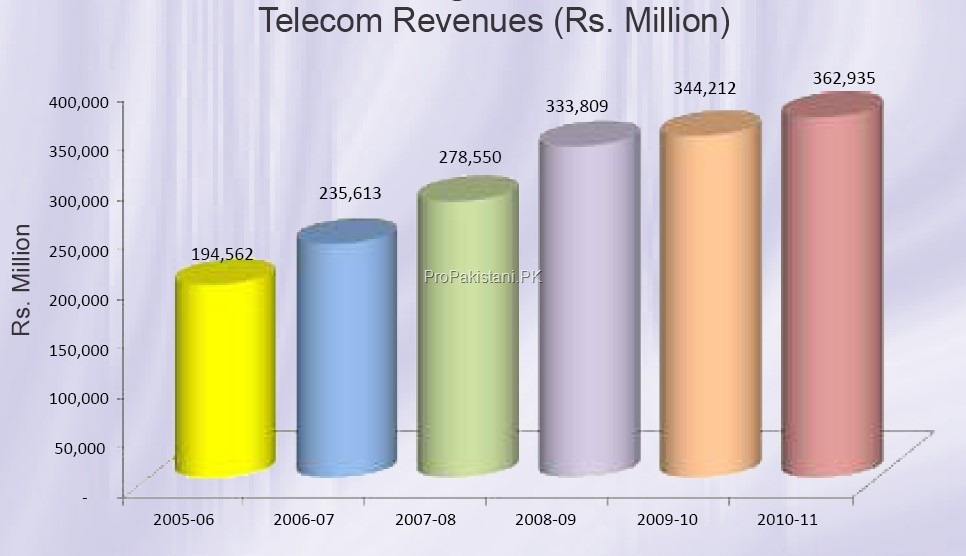 Despite tough working conditions and hit on national economy due to floods and inflation, telecom sector exhibited stability in the FY 2011 as revenue of telecom operators swelled to an all-time high Rs. 363 billion in 2011, at the end of financial year, it was revealed in Pakistan Telecommunication Authority (PTA) report.

Revenues of the telecom sector reached all time high during the FY 2011 as these touched the mark of around Rs. 363 billion, registering boost of 5.4% compared to the year before.

Rise in telecom revenues is mainly attributed to the swelling of revenues of mobile services, as other services except WLL have reported reduction in their total revenues. 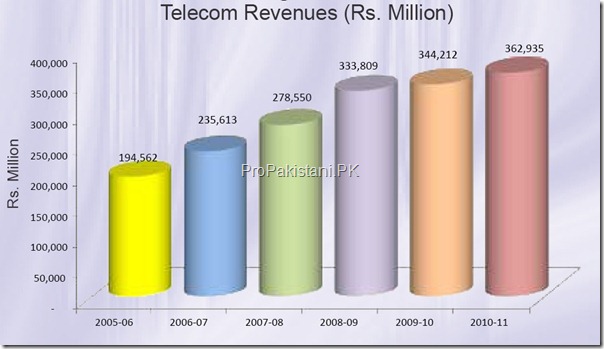 Contribution to the National Exchequer

Telecom sector made its highest ever contribution to the national exchequer in the FY 2011 as around Rs. 117 billion were placed by the telecom companies and PTA compared to Rs. 109.1 billion that were deposited in the kitty last year, showing 7% growth during FY 2011.

Telecom companies deposited over Rs. 100 billion on average a year totaling an amount of Rs. 627 billion deposited in the national exchequer during the past six years.

The Authority alone has deposited over Rs. 72 billion in national exchequer during the last six years which include Initial and Annual License Fee, Annual Spectrum, USF and R&D Fund Contributions. However, a modest decline of Rs. 2 billion was witnessed since last year in PTA deposits owing to non-payment of APC for USF by a few telecom companies owing to litigations in the Court of Law. 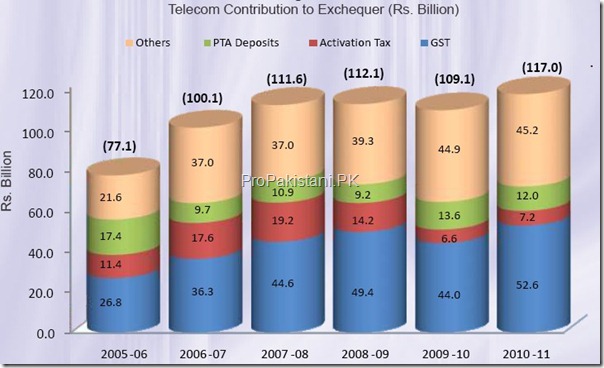 If one looks at the share of each service in total GST/FED collected from telecom sector, it is seen that cellular services contributed Rs. 44.9 billion (FY 2011) compared to Rs. 36.2 billion (FY 2010), reflecting an increase of 25% in one year.

As Basic Services have been exhibiting slow growth their GST collections dropped by 18%. Apart from GST/FED, activation tax collections also spiked from Rs. 6.6 billion (FY 2010) to Rs 7.1 billion (FY 2011) owing to improvement in net addition in mobile subscribers base. 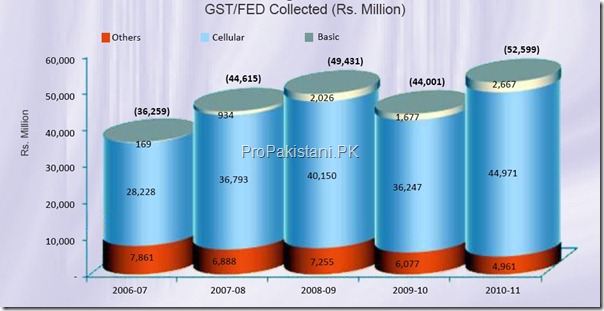 During FY 2011, telecom sector invested US$ 495.8 million with cellular mobile sector being the leading contributor. In addition, USF invested Rs. 3.5 billion in un-served and underserved areas.

In FY 2011, telecom sector attracted over US$ 79 million FDI in the country which is about 5% of the total FDI which came to Pakistan.

Analysis of FDI reveals that the telecom sector of Pakistan needs more investment to boost these figures in the near future. An ideal case could be the auction of 3G licenses which is expected to bring much needed FDI in the country. Better economic and security conditions in the country will further coax the investors to bring capital into Pakistan. 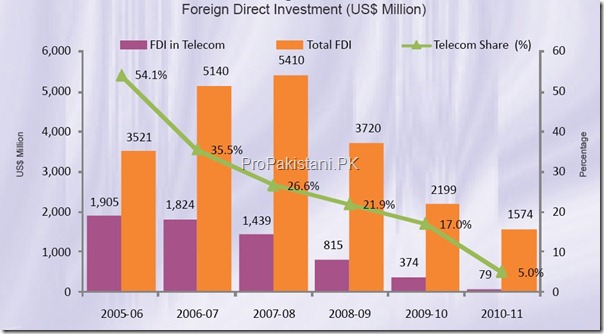 Telecom sector imports showed an upward trend as these jumped to US$ 766.3 million from US$ 725.7 million in the year before. After getting relief in regulatory duty on the imports of cellular mobile handsets, mobile imports grew to US$ 218 million in the FY 2011 as compared to US$ 169 million in the previous year. 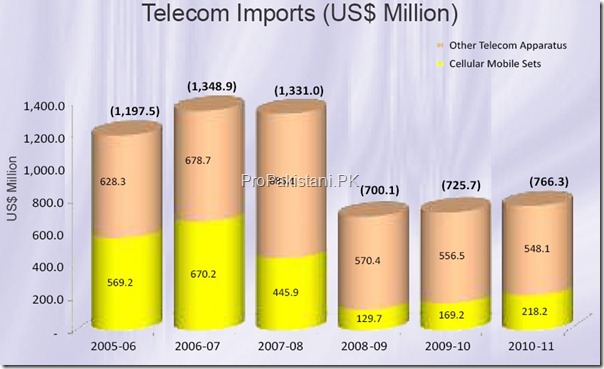