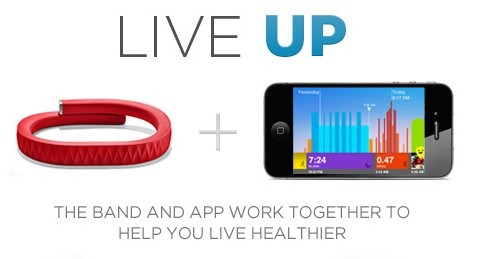 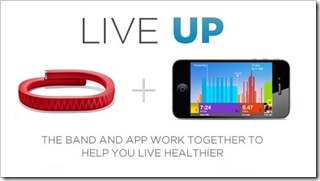 Jawbone a company which is known for its Bluetooth headsets has designed a product that is going to help you move, exercise, sleep and eat better.

Up is a groovy new gadget that makes your life easier when it comes to organizing the most essential of activities.

Imagine having a device that helps you know how much you have slept, what you ate, how much you exercised in a day and if it is time for you to move from your work desk and move around because you have been idle for some time.

Imagine having a device wrapped around your wrist that assists you in keeping a check on all of these essential activities, Jawbone’s Up helps you exactly do that.

Up is a wearable device that has the ability to track the users sleeping, eating and exercise habits. The wristband has to be used with an Apple I-Phone and currently no other platform is supported by the device. The device comes with a free application that can be loaded on to your apple I-Phone and helps you control the device, set reminders, track your exercise , monitor your sleep and food intake.

Why is UP so cool?

The device has some really cool abilities one of them is that it can actually determine whether you are in deep sleep or if you are just dozing. On the basis of this information the device then decides whether it should wake you up or not, an ability which an alarm clock aside not even a human can replicate. Additionally the device is water proof up to 1 meter and the company is promising a battery life of up to 10 days.

While looking at the band you will observe that the band is relatively thin and considering the fact that consumers will be wearing this all around and everywhere it looks sturdy enough to handle all the activity.

One end of the band is topped off with a metal piece or a button that needs to be pressed every time the user wants to let the band know he/she is going to sleep, getting out of bed or beginning / ending a workout. The band has a vibration motor inside and also an LED light that flashes different colors.

On the opposite side there is a metal cap covering a 3.5mm headphone connector which can be used to sync the band with the iDevice in addition the connector is also used to recharge via your computer’s USB port. In order to do that the band comes with a USB adapter that can fit on top of the headphone connector and then can be inserted into the computer for recharging.

The UP I-Phone Application

One of the drawbacks of the device is that it does not sync wirelessly with your phone, in fact the user has to sync the device manually by organizing his/her goals and objectives on the iOS application provided with the device. Once that has been done the user will have to sync the device with the phone thus transferring all the data onto the wristband.

In order to retrieve daily progress from the device the user will have to sync the device back. The application is fairly simple as it organizes your data by day in accordance with the three categories: sleep, activity and food intake the device is designed to monitor. Once the application is launched users at first see’s a bar graph for the current day called the “Me screen”.

The screen features three color coded vertical bars arranged side by side which represent the hours the user slept, the number of steps the user took and the energizing meals the users have consumed. The bottom of the chart, also displays some basic stats related to all these three categories.

For roughly Rs. 9000 ($ 99) the device is a cool gadget to have, the upcoming versions of the device will have the ability to sync wirelessly with the users phone which will be a massive add one for the device and the users. Additionally it would be a huge benefit if the device would be made compatible with other platforms like Android.

This gadget isn’t available in Pakistan as of now. But we hope that suppliers will bring it here soon.

More details on Up are here: http://jawbone.com/up/product