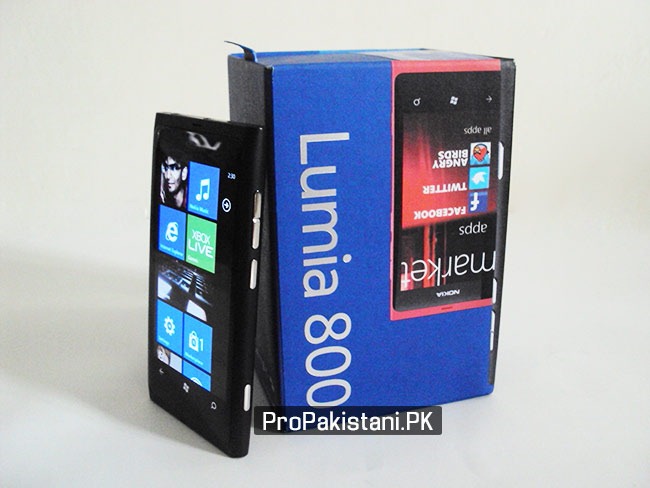 It is still unclear that why Nokia Lumia 800 reached Pakistan this late but apparently company is going to suffer for this delay because of recently unveiled next generation of Lumia phones that are going to hit local markets soon to replace old Lumias. 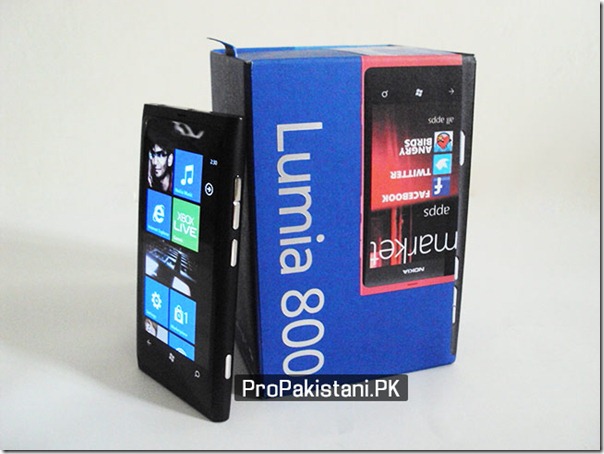 Getting back to the Nokia Lumia 800, which is available in Pakistan for Rs, 40,000 or around, the Windows Phone smartphone comes in 4 different colors. This review unit that we have got is in Black. We are going to do a short review of this device. Unboxing & Hands-on Video is posted at the end of the post.

If you have had the chance of using Nokia N9 – the Meego-based smartphone – then you are instantly going to notice the similarity between the two. Nokia Lumia 800 has rounded polycarbonate uni-body shell, where top and bottom are flat, which makes this guy even tougher but it also mean that battery isn’t removable.

With polycarbonate you don’t have to worry about scratches as there is no paint but the plastic itself is colored. 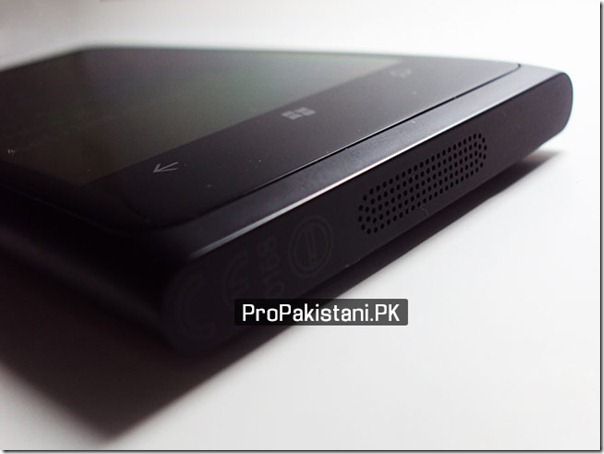 The curved 3.7 inch Gorilla Glass is one of the best qualities of this phone. With a resolution of 400×800 pixels and equipped with Nokia’s clear black technology, Lumia 800 offers black a deeper feel and bright colors.

The curved screen gives you a better experience as you swipe between different screens. Below the screen we have got 3 touch buttons – back, home and search.

On the right side of Nokia Lumia 800 you get Volume keys, Power/Unlock button and a dedicated camera key. The placement of volume keys is very odd, which – as a convention – should be on the left side.

On the top there is a USB port and microSIM slot, both are covered with magnetic mechanism, which is actually very annoying.

In Pakistan microSIM aren’t that popular, but if you are going to buy this phone, you will either have to cut your SIM or you will need to get a microSIM card.

The speaker is placed on the bottom which is unique, but sometimes (especially when you are watching videos) it feels like the sound is actually coming from somewhere else.

On the back of the phone we have got an 8 megapixel camera with dual led flash and a small microphone hidden beneath the flash light. 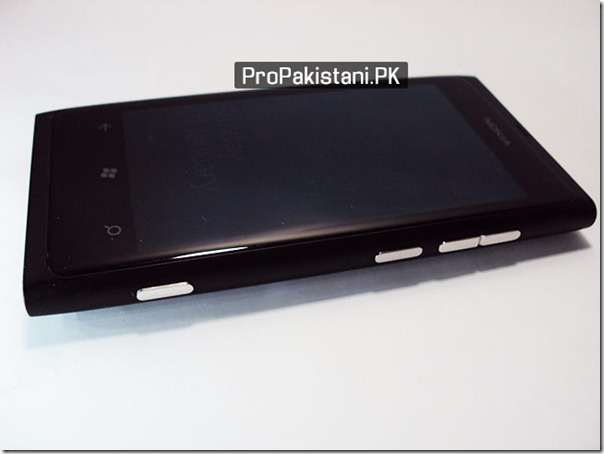 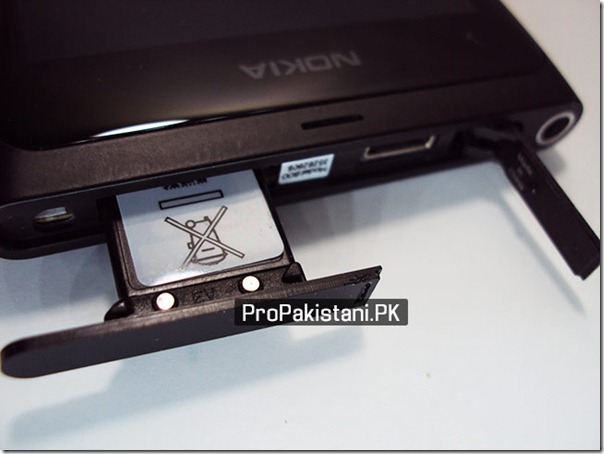 But with great features comes great disappointments too, such as Windows Phone 7.5 doesn’t offer multitasking. You can run multiple apps but the ones in the background are actually frozen and are reloaded when you re-open them. There is no native file manager and you will need to install Zune PC client to transfer files (that too with very limited support for few formats).

Phone is equipped with Bluetooth, but you can only transfer contacts with it, never think of sharing files with the Bluetooth.

If you are an Android / iOS user then you will be disappointed to see limited number of apps available in the marketplace as compared to Android Market or iOS App Store, even worse: most of the Windows Phone apps are paid (though you can try them for free). 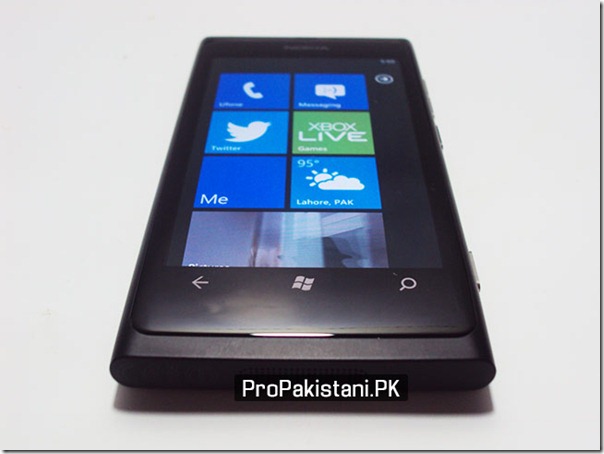 Windows Phone 8, as we have heard, has fixed all these kinds of things. But the bad news is that Lumia 800 cannot be upgraded to WP8, but you relax a little as soon there will be a Windows Phone 7.8 update that will fix most of the issues and will bring a UI closer to Windows Phone 8 to Lumia 800.

Nokia always gets the best stuff, when we talk about Cameras. This one got an 8 megapixel camera with a dual LED flash, Carl Zeiss optics and F2.2 aperture, making it very fast.

It can also record 720p videos at 30fps. You can either use the dedicated camera key to take images or just tap on the screen and it will auto focus to capture image. You can also go directly to the camera from standby, just press the camera key hardly and it will bring up the camera in no time.

The camera result is satisfactory, the dual LED is sometimes annoying to the eyes of subject but does the job well. Its relatively easy to take images with tap rather than using the dedicated key. 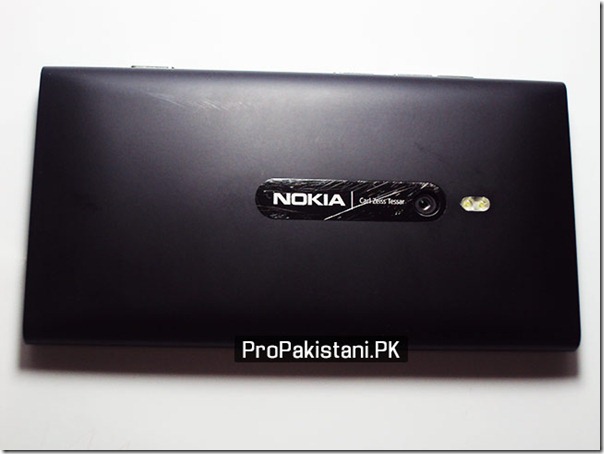 We were disappointed with the Video function though that comes without any Zoom while recording and sometimes it takes a few seconds to focus things if you swiftly move the camera.

You can turn on the Dual LED flash light permanently while making video, It can help you in making videos in the dark or in the times of Electricity Load shedding.

The phone will generate cloud based contacts list named as People from your connected Facebook, Twitter and other profiles. You can not only call your friends but with a single touch you can get their latest Facebook status updates, tweets and more. Of course you can manually add contacts too.

When you press the Phone tile, it opens the history screen and you will have to tap the dial pad icon to bring up the dial screen, no smart dialing though.

The call quality of this phone is actually very good, due to the polycarbonate shell the radio signals have less chances of getting disturbed which makes the call quality a lot clearer.

The Nokia Lumia 800 supports regular SMS, MMS and Email, though we tried our best but using Ufone network we were unable to get the MMS working.

The keyboard layout is nice, in the portrait mode there are good chances of typos as keys are a little tiny. While typing you get auto complete suggestions, which can be turned off from the settings. 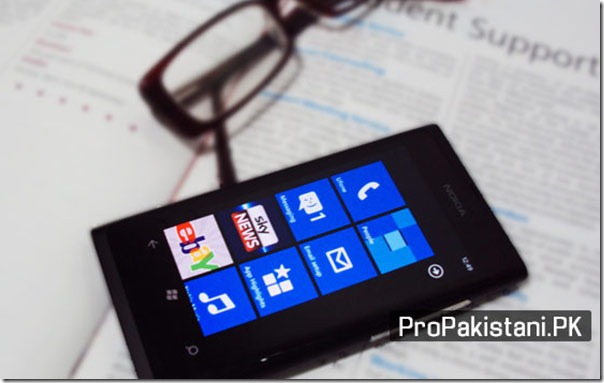 Lumia 800 comes with a 1450mAh battery, and you can’t replace it because of single unit polycarbonate shell. You can charge it through your computer using the USB cable or with the odd looking USB Charger.

If you don’t listen to music / videos, and use Wi-Fi only when needed, then the phone can be used for almost two days without charging. But for a heavy user the battery won’t last for a whole day – but that’s normal for a smartphone.

The Window Phone battery saver feature is also nice and gives you a couple of more hours until the battery is fully drained.

The Lumia 800 is available for Rs. 40,000 in the major areas of Pakistan, which according to our opinion is little over priced.

Lumia 800 is a very sophisticated and unique device, the design is nice and the Windows Phone interface makes it even more elegant. Despite the fact that Nokia delayed the launch of Lumia 800 in Pakistan and that its bit overpriced, I am sure Nokia fans are going to love this device.

But if you are going to buy your first Windows Phone then you would probably want to hold for a while (maybe for couple of months) to wait for Windows Phone 8 devices to hit the stores.

Have a look at the Unboxing and Hands-on: